Lost Yorkie Gets Adopted By New Family, Despite Owner’s Pleas 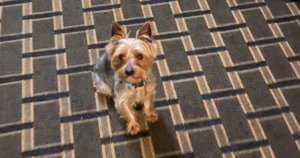 Brian Walton from Oklahoma is currently in a difficult situation regarding his Yorkie named Jax. Jax was Walton’s best friend for the past two years but one day, he suddenly went missing. Walton searched for days to find Jax but had no luck. Then, he went out of town for two weeks, and when he came back, he found out where Jax was. But he was already adopted by a new family!

Now, Walton is confused and heartbroken. He doesn’t want to cause any trouble, but he will do whatever it takes to bring his furry friend home.

While Walton was away, he had spotty cell service but never received any calls about Jax. He didn’t learn where Jax was until he received an email from the microchip company, PetLink. They alerted him that the microchip’s ownership had been transferred to someone else. Walton was shocked that the company would allow a transfer without his consent.

He later found out that Jax was found in Albuquerque, New Mexico. There’s no way he could’ve traveled that far on his own, so it’s likely that someone found him in Oklahoma and then brought him to New Mexico. Somehow, he ended up at the Albuquerque Animal Welfare Department.

According to the shelter, they took the necessary steps for lost dogs. They scanned Jax’s microchip and contacted Walton. They said they called him, but no one answered. Walton explained that he never received a missed call from Albuquerque. They also claimed that they sent a letter, which Walton never received. So, after the seven-day waiting period, Jax was put up for adoption and found a home shortly after.

Jax’s new family refused to return the pup to his rightful owner. Walton even offered to pay for a different dog for them, but they wouldn’t budge. Of course, it must be hard for them to give up their new family member, but Jax likely has a stronger bond with Walton. The family should at least consider working something out with Walton for Jax’s sake.

Fighting for His Friend

Of course, it’s not fair to drag an animal organization through the mud, especially if they’re being honest about the steps taken. But something went wrong, and it’s confusing as to why Walton never received any contact. And it’s even more heartbreaking that the microchip company and the new family are okay with taking a lost dog away from their human.

“I’m not doing this to be spiteful or to be mean. I’m doing this because I love him, and I want him back,” Walton explained.

Walton has posted on social media and done interviews, hoping to spread the word. But if nothing works out, he said he will consider taking legal action. It’s good to know that the dog is in a loving home rather than on the streets, but Walton will continue to do anything he can to make things right.

The post Lost Yorkie Gets Adopted By New Family, Despite Owner’s Pleas appeared first on iHeartDogs.com.