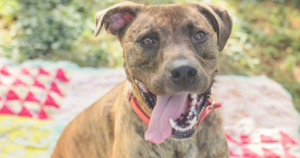 On average, dogs spend anywhere from a couple of days to many months within a shelter. There are a lot of different factors that can influence the length of their stay, and life in a shelter can be stressful for them. But after 260 days, the longest resident of McKamey Animal Center in Chattanooga, Tennessee finally went home.

“We’re not really sure what his living environment was like prior to coming to us, but it was very apparent that he didn’t trust everyone right away,” said Lauren Mann, advancement manager at the shelter.

Big Mac, a beautiful brindle boy, was one of those pups that struggled with life in the shelter. He was extremely fearful, and found strangers and new places very frightening. His lack of affection and his apprehension to approach shelter visitors likely played a large part in his extended stay. So, before long, Big Mac was the longest resident at the shelter.

But once a volunteer from the shelter decided to foster him, and took him to her home, he was a completely different dog. He was able to relax, open up, and bond with his foster mom. She fell head over heels for this sweet boy, and Big Mac became what is known as a “foster fail.” His “temporary foster home” became his forever home.

“Her resident dog took him under his wing, and when they were out for a walk and he’d get a little scared, her dog would be like, ‘No, it’s OK,’ and he’d show him that it was OK and people could be trusted,” said Lauren.

Inside the shelter, Big Mac was shy and fearful, but once he found himself in a comfortable home environment, he truly opened up and his personality began to shine. He rested for an entire 12 hour night, and then woke-up excited and ready to play with both his new furry siblings.

Once it was official that he had found his new forever home, shelter workers wanted to do something special to mark the occasion and to say goodbye. So they sent Big Mac off into the world with a standing ovation. Smiling staff and volunteers lined up outside the shelter to clap for Mac and wish him well. It was bittersweet. They will miss the big, sweet brindle boy, but they are thrilled to see him go to such a loving home.

You can see Big Mac’s super sendoff in the video below.