Picture this: You’re scratching your dog’s belly. Then your fingers run along something small and bumpy. If you’re like me, you have to dig through a layer of dog fur to figure out what it is. Eventually, you find a weird, fleshy, mole-like bump and realize: Hey, that’s a nipple! This can lead you to a whole number of questions, like, Why does my dog have nipples? Do male dogs have nipples, too? How many nipples do dogs have? Let’s check out some facts about dog nipples right here:

First, What Do Nipples Do in Dogs? 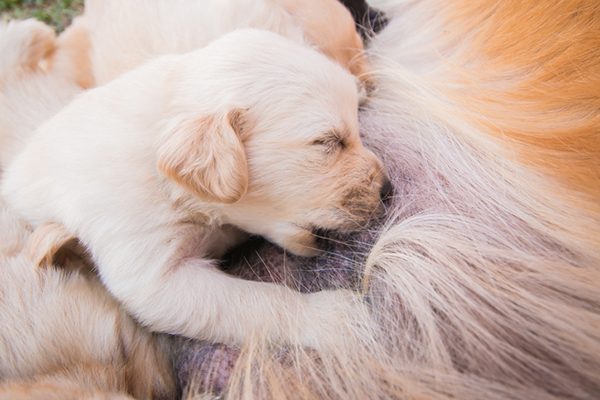 For female mammals (including humans), nipples secrete/produce milk to feed infants. That’s the same role nipples play for female dogs and their puppies, says Nataya Chayasriwong, associate veterinarian at Country Oaks Pet Hospital in Sacramento, California. But, as Dr. Chayasriwong points out, the typical dog owner won’t ever see that.

“We don’t really see milk production in our dogs nowadays since most of our animals are spayed,” Dr. Chayasriwong explains. “So, they don’t develop the mammary glands like they would if they were intact.”

The mammary glands swell up on female dogs during heat or when they are lactating. The nipples are usually larger and more pronounced than the small bumps you find on spayed females.

Nipples range in color from pink to black, depending on your dog’s breed and coloration.

How Many Nipples Do Dogs Have?

It all depends on the breed, Dr. Chayasriwong says. “It can range from 6 to 10 on average,” she explains. “Most dogs are symmetrical, meaning they have an even number of nipples on both sides. Sometimes there are an odd number of nipples, though.”

But why do dogs have so many nipples? It’s because they have large litters with about two to eight puppies. All those puppies need feeding, hence plenty of nipples for them choose from. Dr. Chayasriwong explains that you can actually tell how many babies a particular mammal has based on their nipples.

The more you know!

Do Male Dogs Have Nipples, Too?

Yup! You might have noticed that the human men in your life have nipples — they have them for the same reason dogs do. As Live Science reports, “During the first several weeks, male and female embryos follow the same blueprint, which includes the development of nipples.” This is before the genes that develop male genitalia switch on; by then, as Live Science puts it, “those nipples aren’t going anywhere.”

Now that you know about your dog’s nipples, let’s look at what problems or issues affect them.

“The mammary tissues can develop cancers,” Dr. Chayasriwong says. “That’s why it’s really important for people to bring in dogs regularly so we can check for any weird bumps or lumps. Problems in mammary glands are more likely to appear in female dogs who are intact, or female dogs who were spayed later in life.”

This is because the hormones during heat that cause dog mammary glands to grow can cause abnormal growth, which may lead to cancer. “On rare occasions, you’ll see mammary gland cancers in male dogs, too,” Dr. Chayasriwong adds.

Another Issue That Affects Dog Nipples? Mastitis in Dogs

Another issue that affects a dog’s mammary glands is a bacterial infection called mastitis. Mastis in dogs can be life-threatening if left untreated.

Mastitis is often seen in intact female dogs who either just had puppies or had a pseudo-pregnancy during heat. (Basically, a female dog at the end of her heat acts like she has puppies, with her mammary glands swelling as a result. She may also do things like guard her toys like they are her puppies.)

It isn’t just limited to intact female dogs, though. Spayed females and even male dogs can develop mastitis as well.

The Merck Veterinary Manual reports that mastitis can occur due to “poor sanitary conditions, trauma inflicted by offspring and systemic infection.” Signs of the infection include swollen mammary glands that may or may not be leaking pus, and your dog appearing lethargic and/or not eating. If your dog does have puppies, she may not be feeding them and the puppies may appear malnourished.

If you suspect your dog has mastitis, he or she needs to get to the veterinarian right away. Left untreated, mastitis can lead to septic shock and kill your dog. Once your veterinarian confirms mastitis as the diagnosis, she will prescribe antibiotics for your dog. She may also have you apply warm compresses to the affected glands, and regularly milk them out to clear out the ducts.

In serious cases, your dog may need intravenous fluid therapy to treat shock or dehydration. If the mammary gland is abscessed or just can’t be saved, surgery is required to remove it. If there are puppies involved, they may need treatment too if they are malnourished and dehydrated. You might find yourself feeding them until mom is better.

You’re in luck, though: Mastis in dogs is easily treatable if caught early. Most dogs make a full recovery.

And Here’s a Weird Thing About Dog Nipples …

Why would a nipple grow there? “There are lines nipples typically follow during development of the placenta,” Dr. Chayasriwong explains. “Typically, the lines extend from their arms to their feet. Those lines are why nipples are where they are on a dog’s [body], but sometimes there’s a stray one that develops in a weird place.”

If you do find a fleshy bump on the inside of your dog’s leg (or other odd place), check the opposite leg for anything similar. Dr. Chayasriwong says if there is an identical bump symmetrical to the first bump, chances are it’s a nipple. If you don’t, have your veterinarian check the bump over just in case it’s something serious.