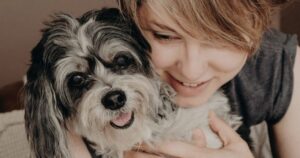 Being a dog lover, you likely notice when pet food recalls are announced on the news or while scrolling through Facebook. Either a pet of yours has been affected, or the mere thought of your dog potentially becoming ill from their food had you beside yourself.

But how would you feel if there weren’t any laws governing pet food safety? Or, if you didn’t have anyone to tell you if something was potentially wrong with the pet food currently sitting in your pantry?

Well, that’s the current situation in Australia, and it’s the main reason why Molly Patton is so adamant about sharing her dog Scarlett’s story.

Since she was 12-years-old, Molly and Scarlett were best friends. The adorable Maltese-Shih Tzu had a sweet, hilarious personality that lit up rooms and added lots of love and laughs to Molly’s life. That’s why, for years, Molly and her family had been buying what they believed to be pure, 100 percent raw kangaroo meat for their dogs. But after both of the family’s pups began showing some serious symptoms, they realized that something was wrong.

Upon further investigation, they found out that not only was the meat a mix between kangaroo, horse, and beef, but it was also contaminated with a deadly toxin called indospicine. The natural toxin is found in native plants eaten by livestock, which wasn’t even supposed to be mixed into the “100 percent kangaroo meat” Molly thought she was buying.

“We weren’t notified. In fact, we called them [the wholesaler] after my mum came across a post on Facebook that flagged meat purchased from certain retailers between certain dates could be dangerous to dogs,” said Molly.

The family sent samples of the frozen dog food they purchased through wholesaler Backman’s Greyhounds Supplies to the CSIRO and the University of Queensland. The results confirmed that the food was indeed contaminated with indospicine. When contaminated meat containing indospicine is consumed regularly, the toxin can slowly build up in a dog’s system and cause liver disease.

“Never in a million years would I have thought that pet food would not be closely regulated … to make sure we are feeding, essentially members of our family, proper food that is safe to consume,” said Molly.

After eating the contaminated food, Ruby, Molly’s mother’s dog, spent eight nights in intensive care. Luckily, Ruby is making a slow recovery. However, Scarlett was in a fight for her life for almost a month before finally succumbing to organ failure. Together, the family has accrued $16,000 in medical bills. Agriculture Victoria reported that 68 of the dogs that ate the toxic pet food manufactured at the Maffra and District knackery have fallen ill, and that 26 have already died from severe liver disease.

Molly aims to honor the life of her precious pooch, Scarlett, by creating change. Melbourne law firm Maurice Blackburn is currently seeking affected dog owners for a class action lawsuit. Their hope is to accelerate the process of regulating Australia’s pet food industry.

“If anything good comes out of this, it would be to see the pet food industry regulated to the same standards as human foods and to see those regulations audited and mandated,” says Molly.

Currently, there are no laws governing pet food safety in Australia, only voluntary standards. The negligence that allowed this tragedy to occur and the absence of government regulations leaves dogs and other pets vulnerable to another deadly mistake in the future. Australian consumer advocacy group CHOICE has written an open letter to the Minister for Agriculture David Littleproud, calling for the introduction of mandatory industry standards for pet food in Australia.

“I am beyond heartbroken, but the best legacy we can give Scarlett is to, in true Scarlett fashion, make as much noise as possible and ensure she is the last victim in this horrific saga,” says Molly.