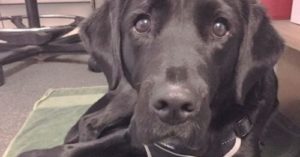 They say when one door closes, another one opens. Well this saying proved true when an adorable Labrador named River was sacked from her training as a guide dog for her love of chasing squirrels, and in turn found her way to a new career.

While River appeared to be wonderful candidate for a career as a guide dog, she began to raise some eyebrows when her love of chasing squirrels was able to distract her from just about anything. While this is usually a harmless past time for most pups, it’s not exactly ideal when your given the important task of leading the blind.

Though she wasn’t the right fit for a career as a guide dog, her sweet nature and kind heart pointed to another prestigious career in the dog world. She was exactly what the Kent Police Department was looking for in a therapy animal to help support vulnerable suspects and victims in their city.

When we see a suspect arrested, we don’t often think about the possible mental illnesses and complications that have led them down this road. A troubling past and possible mental distress is a huge factor in many crimes, and the Kent Police force understands this fact all too well.

“We are often dealing with people in crisis and although their behavior has resulted in arrest, they could be suffering with depression, anxiety or mental illness.Young people may find themselves in custody too and in some cases they are scared and daunted by the experience, whilst others may have difficulty in communicating.” – Sergeant Ian Sutton

Being brought into custody can be a traumatic event for the suspect, especially if the suspect is young or suffering from any kind of mental illness.

“Being detained can exacerbate these issues and we are committed to ensure that police custody is a safe and supportive environment for both police, staff and detainees. We are always looking for new or innovative ways to achieve this.” – Sergeant Ian Sutton

A custody canine’s job is to provide support for suspects during the custody process, and hopefully help to reduce stress for vulnerable suspects and ease the difficulty of communicating with officers. Since beginning her work with the Kent Police Department, officers have noticed a positive impact on the custody process when she is present.

With dogs like River on board at the station, police officers can spend less time diffusing the situation, and more time on getting to the bottom of the crime. Custody canines can make a huge difference to staff and suspects involved in the custody process, and are beginning to be considered in police stations in other areas.

We’re so glad that River found the way to her perfect situation after her initial setback. Keep up the good work River!

The post Labrador Kicked Out Of Guide Dog Training Ends Up Shining In New Career As A Therapy Dog appeared first on iHeartDogs.com.