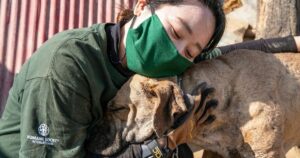 Korean chefs are teaming up with Humane Society International to help eliminate the consumption of dog meat in South Korea. While the majority of South Koreans no longer consume dog meat, many will still eat ‘dog meat soup’ as a tradition during Boknal. The majority of dogs in South Korea are slaughtered specifically for Boknal, meaning the endorsement of plant-based options could save so many lives.

Boknal refers to the three hottest days of the summer between the months of July and August. With Boknal comes the need to combat the heat with nutritional meals, causing many to turn to foods that they believe are ‘invigorating’. Unfortunately, outdated and false beliefs have led many to believe that dog meat falls under this category.

There is a misguided belief among some citizens of South Korea that dog meat is beneficial for health. Bosintang is a soup created to boost energy during the three hottest days, which sports dog meat as its main ingredient. This soup has become a staple in Boknal tradition, leading animal activists around the country to promote cruelty-free options instead.

“Although most South Koreans don’t eat dog meat, it still remains popular for some Koreans over the summer months, when the vast majority of dogs farmed for meat will be slaughtered. It’s a sad fact that millions of dogs are suffering miserable lives on dog meat farms largely to produce soup for Boknal. So our message is simple, by swapping bosintang for one of our delicious plant-based soups, we can keep cool and eat healthy while saving our canine friends at the same time.” – Nara Kim of HSI

Thankfully about 84% of South Koreans say they no longer eat dog meat, but about 70% of these people will still consume bosingtang on occasion during Boknal. This made it clear to activists that their mission should not be about banning the festival altogether, but rather persuading citizens to swap this gut-wrenching habit for a better option.

A team of Korean chefs has stepped in to show their people the tasty plant-based soups they can enjoy instead. Not only would this meal save lives, but it would actually meet the nutritional needs they are looking for.

With all aspects of devastating cruelty aside, animal activists and Korean chefs are convinced that their people would not participate in eating dog meat during Boknal if they knew the conditions these poor dogs were kept in. HSI is working to educate South Korean citizens on the unsanitary and inhumane conditions these dogs are forced to live in, proving that these outdated beliefs on health are outrageous. Eating dog meat is not only an unnecessary and cruel act, but it can be dangerous to your health as well.

Korean chefs have created three different soup options that they hope will eventually replace the standard bosingtang that is severed during this festival. Each of these recipes uses fresh seasonal vegetables, all of which can offer the energy boost you need on a hot summer day. Each of these recipes is also quick and easy, meaning Koreans will no longer need to spend hours in the kitchen preparing their soups.

“I have been to many dog meat farms, and I believe that if consumers saw the unsanitary and inhumane conditions that I see, they would not wish to eat bosintang anymore. We all strive to eat healthier these days, and so our easy recipes are ideal to help us beat the heat and spend a refreshing summer. If we all make compassionate food choices for Boknal, we can achieve an end to the dog meat industry.” – Nara Kim of HIS

We are so grateful that a team of passionate dog lovers has come forward to promote a much-needed change in some traditional practices.  We hope that South Korean citizens will accept these plant-based soups as the new normal, and realize just how cruel the dog meat trade is.