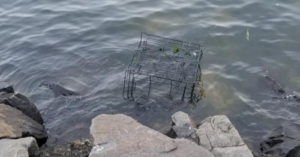 Sometimes there is unfathomable cruelty in the world, and our poor canine friends find themselves helplessly on the other end of it. Last summer, a Pit Bull puppy in New Jersey was left in a cage by the water’s edge during a rising tide. Thanks to a Good Samaritan, he barely made it out. At last, the man responsible for that cruelty will be forced to pay for his actions.

This past Thursday, a Monmouth County jury convicted 35-year-old Aaron Davis of the crime. He faces up to 18 months in prison and will be sentenced on Feb. 14th.

According to Prosecutors, Davis did this to get revenge against his girlfriend’s ex-boyfriend who gave her the dog. Hm… I can think of a few better ways that don’t involve animal cruelty.

It’s been a little over a year since Davis left the then 10-month-old Puppy to drown. His cage was on a small sand bar between the rock bulkhead and the water. The rising tide had already begun to flood it. Jennifer Vaz and her dog out on a walk miraculously stumbled upon him just in the nick of time.

Vaz’s dog alerted her to something near the water’s edge. She followed her pup’s suggestion.

“When we got closer I heard the whimpering. When I looked down, I saw these eyes looking back at me — these cute little puppy eyes all shivered up and scared.”

Vaz climbed over the wall to get to the helpless puppy out of the cage. She put her other dog’s tags around his neck and brought the puppy in to the SPCA for treatment. She named the dog “River.”

Monmouth County Prosecutor Chris Gramiccioni confirmed to ABC7 that if Vaz hadn’t gotten to River right when she did, the dog would have drowned.

“High tide would have been at 10:30, and this crate to house this small dog was probably two and a half feet off the ground. The water was rising through the crate and just in a matter of less than an hour, River wouldn’t have made it if it weren’t for Jennifer coming to take him out of the crate, saving his life.”

River didn’t deserve what he got, but he definitely deserves what he has now: happiness. You can at least rest easy knowing he is doing great with his new dog sibling and parents.

After rescuing him, Vaz fostered River for a while before eventually adopting him. He and his brother Boxer mix are spoiled with love and plenty of toys.

If you witness any acts of animal cruelty, report the information and any supporting evidence to your local police and humane society or animal control!