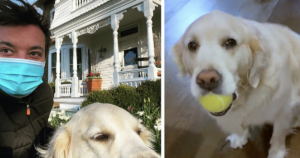 During the coronavirus pandemic, many celebrities have found ways to continue their jobs from home. Jimmy Fallon is one of the many people who chose to move their popular show to their homes. While there are a lot more distractions and less technology at home, Fallon has still found a way to make it work.

Gary, Fallon’s loyal dog, is very confused about the whole situation. She doesn’t know why her dad is home all the time now, but she does whatever she can to get some screen time on his show.

Ever since Fallon started quarantining with his family, Gary has become even more present on the show and on social media. In Fallon’s first episode of The Tonight Show: At Home Edition, he introduces Gary as his first guest. While Gary doesn’t really do much on the show besides make an appearance, she seems happy to be included.

To make Gary’s first appearance even more memorable, Fallon’s daughter runs up to give the dog a hug. They take the spotlight away from Fallon for a few minutes, but it’s okay since they’re so adorable!

Gary has also taken over her dad’s Instagram during the pandemic too. Fallon has posted plenty of adorable photos of her, along with some hilarious videos. In one video, Fallon does a special interview with her. With the help of Drew Barrymore, Gary answers his questions in a brutally honest way. Sure, our dogs love us being home more, but maybe they’re also getting a little sick of us.

On a recent episode of Fallon’s at-home show, Gary made an appearance yet again. However, it wasn’t planned this time. Gary clearly felt that she needed more chances in the spotlight, so she did what she had to do.

While Fallon is in the middle of his monologue, Gary wanders over with a tennis ball in her mouth. He reaches down to pet her for a moment. Then, he suddenly mentions on how stinky she is. Poor Gary seems to get offended by his comment, so she walks away.

A few seconds later, Gary decides that she’s not done being filmed. She comes back and sits down near her dad, soaking up all the attention from internet fans. He tells her to lay down, but she just keeps sitting there with a tennis ball. She looks up at her dad longingly.

Fallon is still trying to figure out why Gary is so smelly though. His wife, who is recording the show, says that she tried to clean Gary, but the stench didn’t go away. The silly dog likely rolled in something or ate something she wasn’t supposed to. Clearly, Gary is fed up with the discussion about her smell, so she exits with her head hanging low.

Poor Gary needs to work on her personal hygiene, but at least she got the fame she desired. She seems a little embarrassed by her dad’s actions, but she knows she’s the real star of the show.

You Can Watch the Episode Here: