Humane Society Is Investigating Petland Due To Animal Cruelty 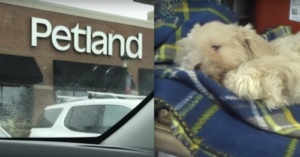 Many dog parents know that it is always important to adopt instead of shop. However, there are still people that don’t agree with this, but the humane society is working to change that. Petland is one of the biggest pet store chains that sells puppies, and while many employees and customers have been skeptical over the years, the humane society has recently been investigating Petland on the grounds of animal cruelty.

This investigation started when an investigator found dead bunnies and a deceased puppy in the freezer of a Virginia Petland. As it turns out, Petland locations all over the United States have been denying their animals proper care and selling sick puppies to customers. Who knows what else goes on in these horrible facilities?

“There’s nothing we can do because they don’t get checked by a vet,” said a regretful former Petland employee when asked about the frozen animals. “We just let them die.”

During the investigation, many dogs were found with parvovirus and distemper, both of which are highly contagious and could even be lethal. Some even had campylobacter and giardia, which can be passed on to humans!

Sadly, this company seems to only care about making money, which is why they have been selling sick puppies for ridiculously high prices. The humane society is disgusted by these horrible conditions, and they want to do everything they can to put an end to this.

Putting an End to Puppy Mills

The reason many of these puppies are so sick is because they’re from puppy mills. When asked if this information was true, all the managers and owners of the stores denied it, but the humane society later found proof that puppy mills had been selling to Petland locations.

About 90% of the puppies sold in pet stores are from puppy mills. Those stores will tell you otherwise, but the sad reality is that even if a breeder is “USDA approved” they could still be running a puppy mill. So, don’t trust what pet stores say because they will often just tell you what they think you want to hear.

Since these dogs are from puppy mills, they are bred in inhumane conditions with parents that are even more unhealthy than the puppies. So, when they arrive at the pet store, all the puppies likely have health issues even if they appear fine. Instead of getting these puppies the treatment they need, the store just continues to sell them or finds a way to get rid of them.

Since this investigation began, more and more past Petland employees have spoken up about the horrors of these pet stores. Many of these employees were just teenagers at the time, so they didn’t know what they were getting into or what they could do to stop it. One previous employee even posted about their experience on Reddit, and it has stirred up a lot of discussion so far.

Employees have explained that they do not receive proper training to care for these puppies, and if the puppies have health concerns, they are not usually addressed until it’s too late. One past employee even said that they saw sick puppies being sent back to a puppy mill. It’s heartbreaking to imagine what could happen to those puppies after that.

It’s not just the puppies that are being neglected either. Past employees have mentioned issues with all the different animals that Petland sells such as bunnies, birds, and even reptiles.

When employees are hired, they are asked to sign a non-disclosure agreement so that they won’t talk about what goes on behind closed doors. Many employees have gotten fired just for telling the managers that what they saw was wrong.

Ryan Corridon, a previous employee, said that when she worked at Petland, she witnessed a puppy fall several feet to the floor. She did what she could to care for the puppy, but she knew he was in bad shape. That puppy was later sold a customer despite Corridon’s efforts to stop it.

“I said, ‘that’s not right,’ [he] could have internal bleeding, [he] could have broken bones, anything could be wrong with the dog,” said Corridon. “That night I got fired. [The manager] pulled me aside and said they didn’t have enough money to keep me on.”

Help Put an End to Petland

The more word that is spread about these issues, the sooner these horrifying actions can stop. More people need to be educated about pet stores and puppy mills to truly make a difference for these dogs.

If you want to help support this cause, click here to sign the petition to put an end to Petland’s lies. No animal deserves to be treated this way, and pet stores should not be allowed to sell puppies, especially in conditions like this.

The post Humane Society Is Investigating Petland Due To Animal Cruelty appeared first on iHeartDogs.com.