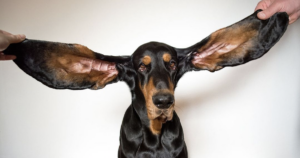 A three-year-old Coonhound named Lou has always thought that she was special, but now, she has proof! Lou has the most distinct ears you’ll ever see on a dog. They droop well past her neck, giving her a memorable and adorable appearance.

In 2020, Lou was confirmed to have the longest ears of any living canine. She will be featured in the Guinness World Records 2022 book, along with many other record-breakers, such as a cat and dog duo on a scooter.  Yet, even though Lou is a new celebrity, her mom says she has acted like a star ever since she was a puppy.

When Paige Olsen first met Lou, she immediately fell in love with her ears. She never expected those ears to give her pup a moment in the spotlight. Instead, she just thought they were a cute, quirky trait. But during the COVID-19 pandemic, Olsen decided to examine the dog’s ears more closely.

Lou’s ears are 34 centimeters long (13.38 inches). So, Olsen submitted those measurements to Guinness World Records. The company confirmed her record on July 30th, 2020, and they stated that she’s related to the previous record holder.

“Lou might think she’s special – but I think she’s thought that from the beginning,” said Olsen. “I think she’s always known she’s a little bit better than the rest of us.”

Soaking Up the Fame

Lou is thrilled to see herself featured in the new Guinness World Records book. Olson hopes that this win inspires other dog parents to embrace their pup’s unique features. After all, Lou has never let her giant ears hold her back.

“Now people can’t wait to get her paw-digraph! I’m very proud of the furry little munchkin for being so special,” said Olsen.

Olsen says that Lou’s ears also don’t cause her any trouble medically. She checks them regularly and cleans them when necessary, but it’s no different than how she cares for her other floppy-eared dogs. She has three other black and tan Coonhounds, but none of their ears are quite as majestic as Lou’s. Lou also wears an adorable “snood” in the winter to keep her ears warm.

Of course, at the end of the day, Lou is just a dog who deserves the same love as every other canine. Her ears make her special, but Olsen would still adore her no matter what she looked like.