Hope Solo Says Emotional Goodbye To Dog Who Was Shot 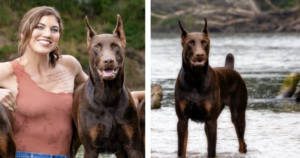 Hope Solo, former soccer goalie, and her husband purchased 6 acres of land so their 5 Doberman Pinschers would have plenty of space to run. They thought it would be a fun, safe environment for the dogs. However, they never anticipated that one of their furry friends would get hurt in the process.

Their dog Conan loved exploring the property. He always came back to the house happier than ever. But one day, he wandered a bit too far, which put him in danger. When Conan came back home, he had serious injuries from a bullet wound. Without hesitation, Solo rushed him to the hospital.

At first, the couple was hopeful that Conan would survive. Solo posted about it on social media, mentioning that they might have to look into a prosthetic leg for the dog. However, she didn’t share any specific details about the incident.

“It’s hard news to share, but harder to make sense of this heinous act,” wrote Solo. “Jerramy and I are shocked and heartbroken, but we want to say thank you to Wilkes Veterinary Hospital and their staff for rushing Conan into emergency care.”

Sadly, only two days later, Solo posted another update to share that Conan had passed away. He lost too much blood, so there was no way to save him. Solo and her husband are devastated and still in shock about the whole situation.

Solo shared an emotional post as a farewell to her beloved dog. She posted a photo of her with Conan, along with some photos of him with his dog siblings. Even though they had 5 dogs in their home along with two newborn babies, they still had plenty of love for each one of their family members.

“We’re brokenhearted to share that Conan passed away from blood loss last night,” wrote Solo. “He fought up until the very end. We’re crushed. Just a dog running in the woods, trying to make his way home.”

It’s unclear who’s responsible for shooting their dog, but that person deserves to be punished. Even if Conan had wandered onto someone else’s property, violence is not the way to solve it. Doberman Pinschers often get a bad reputation, but they are such sweethearts. Conan was an especially sweet and loving dog.

“He wandered 30 yards off our property when he was shot. As animal lovers we are struggling to make sense of anyone using their right to own guns to shoot pets of any kind,” wrote Solo. “We have had pets come onto our property and always helped them get home safe.”

Regardless of the details, it’s clear that this event was horrific. We should all keep Solo and her family in our hearts during this difficult time. Rest in peace, Conan, you will be missed greatly.

The post Hope Solo Says Emotional Goodbye To Dog Who Was Shot appeared first on iHeartDogs.com.