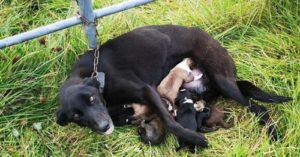 Last week a kind-hearted citizen stumbled upon a nursing mother that was tied to a gate. Whoever tied her up left just enough room for her to lay and nurse her puppies, but offered no other assistance in terms of survival. Lacking food and water, she wouldn’t have survived much longer.

The citizen immediately contacted the ISPCA as soon as she was found, and help rushed to the scene. When the rescue workers arrived, they couldn’t believe how anyone could be so cruel.

This poor mom had barely enough slack on her chain to even lay her head down and rest. She had fought so hard, and it was time to finally bring her and her babies to safety.

The ISPCA team rushed the mom and her puppies to the ISPCA National Animal Centre for an urgent veterinary assessment. Apart from being cold and hungry, the mom and her babies didn’t appear to have any major health issues.

One thing that was clear was how underweight the mom was. With being left with no food and still having to feed her puppies, she was absolutely drained.

“Leaving a young dog only two years old tied up without water, food or shelter most definitely put her along with her young puppies’ lives at risk. We are urging pet owners to spay or neuter their pets as early as possible to reduce the high number of unwanted animals. I don’t understand how anyone can think it is okay to leave a dog tied to a gate to nurse her puppies.  With the recent level of rainfall and cold weather this week, the outcome could have been very different and I’m happy we were alerted so we could help them”. – ISPCA Centre Manager Hugh O’Toole

The mom was immediately scanned for a microchip once she arrived at the medical center, but there was no chip to be found. With no trace of ownership, the ISPCA will have to rely on tips from the public in order to find the cruel owner who tied up the mom and her puppies.

While the rescue continues to search for the owner, the mom and her babies will stay in foster care until they can all be nursed to health and are old enough to be adopted.

Since being in the ISPCA’s care, these lucky pups have all received a special name. Mom will be called Emmy Lou while her puppies are named Billy Ray, Dixie, Dolly, Dotty, June and Patsy. Their country strong names fit their impressive will to survive!

We are so glad that this beautiful family is in professional hands, and hope their future is filled with the love they deserve.

The post Hope For Nursing Mom Of Six Who Was Tied To A Gate & Abandoned appeared first on iHeartDogs.com.