Homeless Cat Comforts Abandoned Dog Until They Are Both Rescued 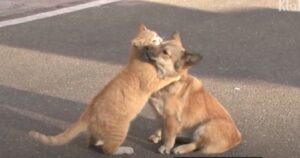 The love and loyalty of a pet is incredible to experience. Once a dog chooses you, that’s it, you’ve been claimed. You become their everything. But, why does this happen?

Well, dogs are naturally pack animals who favor the company of others. Many experts believe that this pack mentality, coupled with a survival instinct, is why dogs remain so loyal to their human companions. They bond deeply with their caretakers, and view you as their pack. Dogs are even well known to extend this love and loyalty long after an owner has passed away, or even after they’ve been abandoned.

Not long after an elderly couple moved from their apartment to an assisted living center, residents started noticing their dog hanging out at the entrance of the building. Every day and night, they’d see him curled up in the exact same spot on a blanket by the front door. It became obvious that he had been abandoned. But they also noticed that he wasn’t alone.

A homeless cat took a liking to the pup and the pair instantly became inseparable. For six long months, everywhere the dog went, the cat followed shortly behind. They even shared the food that residents had been leaving for them as they passed by. Not only did they hang out together and play all day, but they also snuggled up together at night, comforting one another and keeping each other warm until morning. It was undeniable that the pair took comfort in one another.

“They hug to keep warm when they sleep together at night. Maybe they think they are in the same situation since they met on the street. They know they are different, but they get along well, they comfort each other, ” said a resident of the apartment complex.

However, when residents approached the door of the building, the cat would dart away, watching from a “safe distance.” But, the dog would stay put. He would stare at each one of their faces, almost as if he was looking for someone specific. Onlookers began to assume that he was searching for the faces of his previous family members. And that he was still holding out hope that they would return for him.

As it grew closer to winter, residents became concerned for their safety. One person even built them a make-shift shelter, hoping it would shield them from the wind and cold. A rescue team was eventually called to the scene, and they were able to catch the pair and get them assessed by a veterinarian.

Both of them were said to be in good health, and were then put up for adoption. The residents of the complex took comfort in knowing that the pair would be somewhere warm and loved by a new forever family.

You can view a full-length video, filled with adorable footage, below.

The post Homeless Cat Comforts Abandoned Dog Until They Are Both Rescued appeared first on iHeartDogs.com.