Hilarious Shih-Tzu Can Fall Asleep In Any Position Imaginable 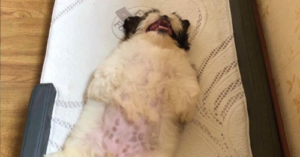 I’ve got the curse of being one of those people who can’t fall asleep unless they’re perfectly comfortable. Staying over on a friend’s couch? Not gonna happen. Sleeping bag on the floor? Don’t even think about it. I need to be in just the right spot, even in my bed.

Luckily our canine friends don’t seem to have that issue when it comes to comfort. In fact, one little Shih-Tzu in the Philippines is now famous for her ability to get cozy in the weirdest places and positions.

Her name is Paningning and she’s got a pretty big online following. A lot of that has to do with the hilarious pictures of her sleeping in the weirdest most unnatural positions.

Her go-to position is flat on her back which looks uncomfortable but is actually her favorite.

Paningning’s person Janess Cua just enjoys taking adorable animal pictures like anyone else and never expected her little pup would go viral like she did. Now Paningning has over 125,000 followers on Instagram and her YouTube videos average around 50,000 views.

To me, Paningning’s fame is no surprise. Look at her. She looks like a fluffy little plank!

The sound-sleeper rose to stardom initially when Cua shared some pictures of her in the Facebook group “Dog Lovers Philippines.” Obviously, the dog lovers loved what they saw and the rest was history.

This sweetie does in fact have the option of beds, but she’s content to lie sideways on them or even halfway off of them. Whatever works.

She often prefers to just sleep on the hard floor. Sometimes she naps with her dog siblings, though they appear to prefer the more traditional dog ways of sleeping.

Cua says on her back is the way she’s most comfortable and she’s been doing this belly-up/arms-out thing since she was a tiny puppy.

It’s truly hard to believe this is a real living animal! She genuinely looks like a 90’s Beanie Baby. I would definitely buy the stuffed version of Paningning if such a thing existed.

The best part is as long as Paningning keeps finding weird places to lie perfectly still on her back, we’ll keep getting the updates via Instagram and YouTube!

I guess I’m mostly just jealous of this dog’s ability to fall into a snooze. I’ll continue to follow her on Instagram nonetheless. You can follow her too @therealpaningning!

The post Hilarious Shih-Tzu Can Fall Asleep In Any Position Imaginable appeared first on iHeartDogs.com.