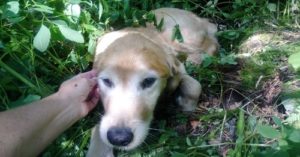 Kelly McDuffie and Danny Hartung were not looking for a lost pooch when they set out on their hike, but they recognized the Golden Retriever immediately. Missing dog posters bearing Max’s photo were hung all over Shenandoah National Park.

When they stumbled upon him, Max had been lost in the wilderness for 11 days.

Max’s misadventure began on July 4 when he escaped from his family’s vacation rental at a nearby resort. Employees and park guests had been searching for him ever since.

The park rangers set up food traps and attempted to to track him with cameras, but after 11 long days Max was still missing. His heartbroken owners feared the worst.

Meanwhile, McDuffie and Hartung made the fateful decision to take a wilderness trail instead of the waterfall hike they had planned. Halfway through, McDuffie was sweating in the July heat when she heard the distinct sound of running water.

As they veered off the trail towards the spring, the pair noticed a patch of fresh blackberries and walked deeper into the brush to pick some. That’s when Hartung spotted Max among the leaves.

Despite her fear of dogs, McDuffie’s maternal instinct kicked in. Max was understandably frightened and growled as McDuffie approached. Luckily she was able to win him over with three boiled eggs, a fig bar, and lots of water!

McDuffie and Hartung were ecstatic to have found the missing dog, but they faced a problem. Poor Max was too weak to walk.

With two miles left in their hike it was too far to carry him so they walked a short distance to a fire road to pick up cell service.

“We called the park rangers to come help,” McDuffie wrote in a Facebook post. “While waiting, Max’s family was given our number and called us crying with joy and so thankful!”

The rangers placed Max on a stretcher and transported him back to civilization while his family headed to the park for a tearful reunion.

Max was taken to the vet that evening. Miraculously, he suffered only minor injuries and is expected to make a full recovery.

“It was a long day, but saving sweet Max made it all worth it!” McDuffie wrote. “He would not have made it out of that spot if not for the water source he so smartly chose to settle near, and the ripe blackberries. All of the stars aligned that day!”

The post Hikers Locate Missing Dog With A Little Help From The Stars Above appeared first on iHeartDogs.com.