Hex the Lab Will Fight Crime by Sniffing Out Electronics 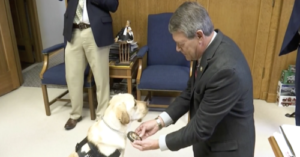 Hex, short for Hexadecimal, is a 2-year-old Labrador that looks like your average dog, but he actually has an amazing talent that can help solve crimes. He is North Dakota’s very first electronic detection dog. This means that he can sniff out small electronics that human officers might not be able to find, even if that electronic is as small as a fingernail! He is very good at his new job, and he is ready to help solve as many crimes as he can.

Hex is one of 30 dogs across the United States that have been deployed to assist with crime cases involving children. When they go to someone’s house with a search warrant, Hex is able to sniff around and find any hidden electronics such as cell phones, hard drives, and SD cards.

This is North Dakota’s first time hiring an electronic detection dog, and so far, they are pleased with the results. Other states such as Wisconsin and Florida already have dogs trained for these duties, but hopefully they will become more common soon. Every state should have these brilliant dogs on their teams.

Recently, Hex completed 6 months of special training at Jordan Detection K9 in Indiana. Specially trained dogs like Hex typically cost around $20,000, but the bureau received a donation from Operation Underground Railroad to help them afford Hex.

Hex’s handler, special agent Jesse Smith, has worked hard to help Hex work on his talents. Smith helps Hex practice by hiding tiny devices around a room and asking Hex to show him where they are. Hex seems to be able to smell them right away, and he is always rewarded for his great work.

In order to find all these electronics, dogs like Hex are trained to sniff out a specific chemical that is found in the memory of these devices. So, even if the devices are hidden well, Hex is still able to find them.

Hex is now declared an official agent of the bureau criminal investigation. He was even awarded a badge for his great work.

Smith says that he expects Hex to be able to go out around 50 times a year to sniff out electronics for crime cases. He has an important job ahead of him, and his amazing talent is something that humans just can’t do.

“We can look and we can look thoroughly, but not nearly to the extent this dog can do because he can find things that are hidden, secreted in a way that nobody else would think of,” said North Dakota Attorney General Wayne Stenehjem.

When Hex isn’t on the job, he stays at home with Smith and his family. He loves his new family, and he even has two Labrador siblings that get jealous every time Hex gets to go to work with Smith.

Humans can only do so much when it comes to looking for evidence. Sometimes you need an experienced dog to sniff it out. Luckily, for North Dakota, Hex is the expert that they’ve been looking for.

The post Hex the Lab Will Fight Crime by Sniffing Out Electronics appeared first on iHeartDogs.com.