Heroic Bystander Saves The Life Of Dog Who Was Run Over 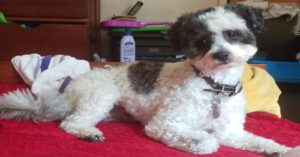 Timing is absolutely crucial in the event a dog survives getting hit or run over by a car. Injured dogs are left completely vulnerable to further injury, totally exposed in the street. A lifesaver in New York had this in mind when he ran into the street to save an injured dog from a worse fate.

The Robledo family was having their car serviced at Honda of New Rochelle. Fortunately for them, general manager James Gallagher worked that day. He was the one who saw the Robledos’ 3-year-old Shih Tzu Charlie get run over by a car on Main Street. Cindy Robledo described her horror to ABC7.

“I was terrified. I was in shock. I couldn’t believe what just happened to my dog… He’s not just a dog. He is a kid. A human being.”

“My biggest concern of course was the dog getting hit again. I heard it whimpering, so I was like, alright the dog’s alive. That’s when I knew time was of the essence.”

Having gotten to Charlie in time, Gallagher offered to drive the injured dog and his family to the vet. Cindy Robledo considered his intervention a godsend.

They already suffered some financial setbacks this year (including losing their home,) so the Robledos were devastated to learn how expensive Charlie’s treatment would be. The Robledos visited 2 clinics the day of the accident and at the end of the day the poor pup needed emergency surgery. They simply couldn’t afford it.

Gallagher, who had already done so much for Charlie, offered to cover the vet bill. The Robledo family vowed to pay him back, but he refused their offers. All he wants is for them to pay it forward when they’re comfortable enough to do so.

“I know what it’s like to not have the finances to be able to take care of a situation. And I wasn’t gonna let a dog die because of money. Absolutely not.”

He also set up a GoFundMe to help cover any other expenses for the family. Charlie is recovering now, but he suffered neurological and spinal damage. At the time of this post, we’re still waiting to know whether he’ll be able to walk again.

Sending all my well wishes to Charlie and his family during his recovery. We really need more James Gallaghers.

The post Heroic Bystander Saves The Life Of Dog Who Was Run Over appeared first on iHeartDogs.com.