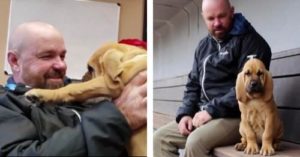 If you have been to A Tennessee Smokies game in the last 8 years, you probably knew about the head groundskeeper’s dog, Hound Dog. After losing Hound Dog last month to a stroke, the team came up with a special plan to help soothe his broken heart.

Hound Dog was an important part of the Tennessee Team, and was adored by baseball lovers around the country. Aside from his role as the unofficial Smokies mascot, was how important of a role he played in his dog dad’s life. Hound Dog was by his dad’s side through the most difficult struggles of his life, so his absence left him absolutely crushed.

“I cant thank all of you enough for your friendship with him, I know there are a ton of you that don’t know me without him. Hound Dog, I will be forever grateful for giving everything you worked so hard for , for me and for us. I love you so much, I can’t wait to see you again. I will also continue to keep chasing the promise I made to you, to be a better person, and never give up chasing my dream our dream and what is ours! You are definitely the baddest WOLF in the pact.” – Eric Taylor

With his favorite pup being his source of happiness through his rode to sobriety, difficulty finding jobs, and his incredible journey to head groundskeeper, it began to make sense that the only way to help mend his heartache would be through the love of another dog.

After hunting for the perfect pup, they found an adorable Bloodhound that was so incredibly cute, he could melt anyone’s heart. Once he was 8 weeks old and ready for his forever home, they planned the sweet surprise.

Members of the Boyd Sports Group and other loyal friends teamed up to make sure this surprise was one for the books. They wrapped the wrinkly Bloodhound pup in a huge Christmas bow, and entered the room in which Eric was unknowingly waiting for the gift of a lifetime.

The look on Eric’s face made it clear just how special this moment was, as he fought back the tears once they entered the room. He immediately grabbed his new forever friend and swaddled him in his arms, all with a smile on his face that only a canine companion could bring.

While Hound Dog’s love can never be replaced, we can’t wait to watch this new friendship bloom!

The post Heartbroken Smokies Groundskeeper Is Surprised With A New Puppy After Losing His Beloved Hound Dog appeared first on iHeartDogs.com.