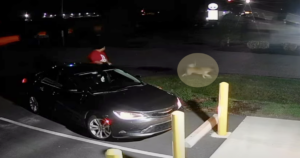 Locals of Elizabeth City, North Carolina, are furious after seeing a video of a man dumping a dog at Weeksville Secure Self Storage. In the surveillance video, he lets a large Akita out of the car without a leash and pours a bag of food on the ground. Then, he drives off without looking back.

To make matters worse, the storage facility isn’t far from the SPCA of Northeastern North Carolina. So, if he had surrendered the dog to them, he would’ve avoided any consequences. But now, officials are on the lookout for the man who abandoned this innocent dog.

Joe Musico, the owner of the storage facility, received a call about a dog on the property. When he arrived, he saw the female Akita wandering around outside with a massive pile of dog food on the grass. He went to look at the security footage, and he couldn’t believe his eyes.

Right in front of the security cameras, a man in a red shirt pulled up and let the dog out of the car. She raced into the grass and did her business as if she’d been holding it for a while. Then, the man got out of the car and dumped a bag of food outside, leaving the bag on the ground after. He drove away without tethering the dog to anything.

“I’m an animal lover. The dog that I have currently was a rescue that was out on the side of the road here in Weeksville, so I was upset and mad,” said Musico. “It was a real bad decision on his part. You can call the animal shelter or call animal control and they’ll come pick up an animal if you don’t want it.”

The Akita is now under the care of the SPCA, where she seems happy and loved. They will hold her for a few days before putting her up for adoption.

A Second Chance at the Shelter

After the storage company posted a video of the security footage on Facebook, it didn’t take long for people to locate the suspect. Many people in the comments believe the man’s name is Darius Hill, but it’s unclear if officials have confirmed that yet.

In the comments, there is also one woman who claims to know the man, but she keeps defending his actions. She says that he has been begging for someone to take the dog for a while and that the shelter wasn’t open when he abandoned the dog. The woman also says she wants to adopt this Akita. Yet, the shelter will likely be cautious about who takes the dog home to make sure she doesn’t get hurt again.

“An animal is a part of your family and when you get them, you can’t just throw them out on the street,” Musico said. “You don’t throw your kids out. People need to think hard before they pick up a pet.”

It’s a miracle that the dog is healthy and safe after the incident. Since she wasn’t tied up, she could’ve run into the busy road nearby. So, she deserves a home far away from the man who hurt her. She needs to find a family who will love and cherish her forever.