Handler Remembers K9 Officer Harlej, Who Was Shot And Killed In The Line Of Duty 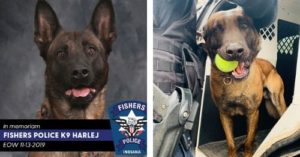 The Fisher Police Department announced the death of a fellow officer on Wednesday, K9 Officer Harlej. Officer Harlej (pronounced Harley) was a respected member of the police force and a loved member of his community.

The horrific night began with an attempt to stop a possible drunken driver. After a brief chase ensued, the two suspects stopped their car and fled from the vehicle.

The two suspects ran into the woods nearby, so K9 Officer Harlej was deployed to find the suspects in the wooded area. After a few minutes of searching, Officers heard gunfire within the woods.

Officers ran to the area in which they heard the shots, and that’s when they found Officer Harlej along with one of the suspects.

It appears that Officer Harlej had attempted to take down Richard Garrett with a bite on the leg. During this time he was fatally shot, and was found lying dead near the suspect.

The two suspects, Richard Garrett and Rashanna Farrow, were taken into custody where they will await their charges. Garrett himself currently faces nine charges including:  striking a law enforcement animal, criminal recklessness with a deadly weapon, and resisting law enforcement with a vehicle.

Once word spread of Officer Harlej’s passing, local officers came together to support his handler Officer Koopman. In the years that Officer Koopman has had Harlej by his side, they had formed an inseparable bond. Along with the bond that the two officers shared, was the relationship Officer Harlej had with Koopman’s family as well.

We often forget that these K9 officers go home with their handlers at night. They are a member of the family, and their dedication to the job does not end once they “clock out.” Officer Harlej and Officer Koopman were each other’s best friend and protectors 24/7. Harlej’s love expanded to each member of Koopman’s family as well.

Officer Harlej loved spending his off time with Koopman’s two sons and his loving wife . Officer Koopman and his sons would take Harlej for a walk each morning, and would soak up each moment they had with their favorite furry protector. The whole family is feeling this loss. Koopman wrote:

“Last night, was the night as a K9 handler you train your heart for but are never truly ready for.
🐾
I lost my K9 partner Harlej early this morning doing what he loved.
🐾
My memories of him are just pure joy and happiness. He was the most dedicated, hard working, and always in relentless pursuit of everything we did.
🐾
Nobody will ever know the time it takes for a K9 to be successful. But everyone will see the successes and we had a lot of successes together.
🐾
Harlej and I spent countless hours together in the nearly 5 years I had him. I think about all the hours of trainings we had and the countless hours we spent together in the car driving around Fishers.
🐾
I think about all the men and women who played a role into making him great and great he was!
🐾
Harlej and I assisted in a lot of arrests and helped get a lot of bad people off of the streets to help keep the city of Fishers safe.
🐾
I will always remember how quiet Harlej was in my car, but at the same time remembering every time that I got out of my car and could see his glowing eyes staring at me with his ears up high. He always waited to be called and was ready to do whatever I asked of him. Harlej did it without fear. I knew every time I got him out of my car, he was going to help every time. Whether that was to find drugs during a walk around or tracking down a fleeing felon.
🐾
I know you’re chewing on some tennis balls right now buddy. Daddy loves you and I’m so glad you were my partner and in my life.
🐾
Love you Hars!
🐾
You are a REAL hero today buddy. And you saved our lives last night.
🐾
EOW 11/13/2019”

Officer Koopman’s wife even wrote a heartfelt blog describing the impact Harlej had on their life, and what an amazing companion he was during and outside of work.

“You wait for both of them to come home together. So when your husband calls you at 3:30 am and starts the conversation with, ‘I am ok…but Harlej is gone.’  A part of you crumbles. The loss feels unbearable.  Your family breaks a little.  And Jarred comes home alone. Most people would prob think…. ‘all this sadness for a dog?’And part of me could believe that. Because most dogs wouldn’t follow you into the darkness of danger.” – Kimberly Koopman

We are sending our love and support to the Fishers Police Department, as well as the Koopman family. Officer Harlej was a hero, and he will always be remembered as such.

Man I miss you Hars

If you are interested in the details of his upcoming memorial, you can find the information here.

The post Handler Remembers K9 Officer Harlej, Who Was Shot And Killed In The Line Of Duty appeared first on iHeartDogs.com.