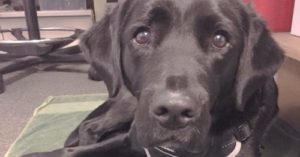 River, like so many other 5-year-old Labs, loves to chase squirrels. For most dogs, this personality trait is a mere inconvenience; but for River, it resulted in her removal from a guide dog training program.

This gorgeous gal wasn’t cut out for work with the blind, but her calm, gentle nature made her the perfect choice for a new form of police service.

“We are often dealing with people in crisis and although their behavior has resulted in arrest, they could be suffering with depression, anxiety or mental illness,” says Sergeant Ian Sutton, coordinator of the program. “Young people may find themselves in custody too and in some cases they are scared and daunted by the experience, whilst others may have difficulty in communicating.”

“Being detained can exacerbate these issues and we are committed to ensure that police custody is a safe and supportive environment for both police, staff and detainees. We are always looking for new or innovative ways to achieve this,” Sutton adds.

After her removal from the guide dog program, River went on to receive her certification as a therapy dog. She worked in a special education school comforting and supporting the children.

The school was so impressed with River’s work, they went on to purchase their own therapy dog. River was out of a job, but ready for a new challenge.

Trainers at Kent Police’s dog unit assessed River’s temperament and found her to be a perfect fit for the unpredictable custody environment. She went to work at the beginning of December, and has been regularly supporting detainees at Maidstone Police Station ever since.

“River has joined the team to offer emotional support to people who are experiencing difficulties, she provides a therapeutic benefit to those in crisis and helps to counter some of the negative behavior we sometimes experience in custody,” Sergeant Sutton reports. “Since beginning work with us she has had a notable positive impact on those she has spent time with, and the atmosphere in custody improves when she is on shift. This allows staff and officers to use their time more effectively rather than diffusing situations.”

Those concerned about the potential dangers a “Custody Canine” may face can rest easy. A press release assures there are procedures in place to ensure River’s safety as she performs her duties.

“Her handler is always there watching over her, she has access to fresh water and food, and she is also taken out for regular breaks,” the release states.

What do you think of the “Custody Canine” pilot project at Maidstone Police Station? Would you like to see your local police initiate a similar program? Let us know in the comments!