Groomer Denies Abusing Shih Tzu Despite Being Caught On Video 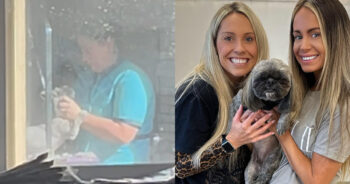 WARNING: This post contains scenes of animal cruelty and may be upsetting to some viewers.

A dog groomer in Anderson, SC, has been charged with animal cruelty after she was caught on video abusing a canine client.

In the video, 38-year-old Cinde Durham, a groomer at Molly & Me Dog Bakery and Grooming, is seen striking a dog in the face with a comb and grabbing the dog by the face and throat. She then hits the dog in the face with a closed fist three times in quick succession. When confronted by police, she denied the abuse, telling them she was trying to control the dog by grabbing the collar. She also denied striking the dog.

Sheldon Miller captured the disturbing video as she worked at a nearby salon facing the North Main Street Molly & Me location. Along with coworkers, Miller watched in horror as Durham hit and grabbed Petey, a three-year-old Shih Tzu. The concerned dog lover immediately contacted Anderson Police to file a report against Durham.

RELATED: Dogs Suffer As More Are Abused Online And Justice Is Never Served

The police report stated: “In the video, it appears as if she strikes the animal multiple times with a comb and then grabs the dog’s face. It then appears as if she strikes the dog three times with a closed fist. The owners of the dog were attempted to be notified by myself and the store. The owners then came to the police department to make a report of the incident.”

Dog mom Wendy Heatherly told WSPA 7 News her dog Gus was left permanently blind in one eye after a grooming session with Durham at one of the Molly & Me locations. Heatherly still doesn’t know the truth of what happened to her beloved Gus.

“And I still don’t know what they did, what happened,” said Heatherly. “All I know is that he went in, he was okay, he came out and I had to rush him to the vet.”

When Heatherly went to the owner of Molly & Me, the owner denied abuse allegations. Heatherly will be filing a report after this latest incident.

Multiple commenters and even the original post on Facebook mentioned hearing about other instances of abuse by this same groomer. Many in the community felt Molly & Me had a shady reputation for a while.

A warrant was issued for Durham, and she has since turned herself in to face animal cruelty charges.

Closed To The Public

While Molly & Me Dog Bakery & Grooming’s Facebook is no longer available to the public, earlier in the week, the grooming studio posted this comment:

“Groomers at Molly & Me are not employees, but rather they are independent contractors. As a result of our commitment to quality service for the pets we serve, we sever ties with any groomers who do not meet our expectations of humane and loving care for our customers’ loved companions.”

Watch the clip below at your discretion.

Molly & Me is closed at this time, with a sign on the door that reads, “Closed for Repairs.”

Petey Says Thank You To His New Heroes!

After dog hero Miller posted the abuse video to Facebook, revealing what happened to the poor dog, she and her coworkers received a surprise visit. Petey, the dog in the video, came by to say thank you and cover them in kisses!

“PETEY got lots of love from us & is doing great. Little shaky but he’s thriving from the attention. Thank you to all who reached out and offered treats and therapy to him!”

At her first appearance, the judge issued Durham a $1,000 bond.

The post Groomer Denies Abusing Shih Tzu Despite Being Caught On Video appeared first on iHeartDogs.com.