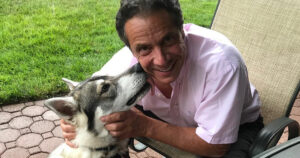 As New York Governor Andrew Cuomo packed up his belongings from the Executive Mansion in Albany after stepping down from office amid sexual assault allegations, he left one very important thing behind: his dog, a 3-year-old Husky mix named Captain.

According to the Albany Times-Union, Cuomo instead asked his staff members to take care of the dog as he left him behind. Cuomo is now leaving the state to go on vacation with no set plan on where the dog will be going once the new governor, Kathy Hochul, takes residence at the mansion.

In recent years, there have been several reports of Captain biting people. One of Cuomo’s employees took the dog in for a few days, but it didn’t work out. Now, Captain’s fate is unknown.

Libby Post, head of the New York State Animal Protection Federation, suggested Cuomo bring the dog to a shelter where he can be worked on with behaviorists to curb the biting behavior and find the dog a new home. Once news broke of the alleged abandonment, Twitter exploded with offers across the country to take Captain in, including from U.S. representative Claudia Tenney.

“I read with disbelief in this morning’s Times Union, that Captain, Governor Cuomo’s dog, had been left at the Executive Mansion after Cuomo’s belongings had been moved out of the Eagle Street building,” Post said in a statement to the New York Post. “The New York State Animal Protection Federation is ready to help place Captain at one of our larger New York State animal shelters, such as the Mohawk Hudson Humane Society in Menands, just north of Albany.”

Amid the governor’s resignation and reports that he was leaving his dog behind at the mansion, his staff spokesman claimed that it was simply not true and that Cuomo was instead looking for someone to take care of the dog while he is on vacation.

“Captain is part of the governor’s family and for your nameless ill-informed source to imply they’ve been trying to give him away is untrue,” Rich Azzopardi insisted Saturday in a statement to the New York Post. “Someone offered to watch him for a few days while the transition was ongoing.”

Post noted that there are several humane societies that would welcome Captain in to help with his behavioral concerns if it is indeed the case that he is in need of a new home.

“Shelters like Mohawk Hudson, Lollypop Farm in Rochester and the SPCA Serving Erie County have excellent behavioral experts who can help Captain resolve his ‘nipping’ issues and adopt him into a loving, forever home,” Post continued. “New York State loves companion animals. Captain deserves better. He will be welcomed with open arms (and paws) into one of our shelters.”

The post Governor Andrew Cuomo Reportedly Abandons His Dog After Moving Out Of Executive Mansion appeared first on iHeartDogs.com.