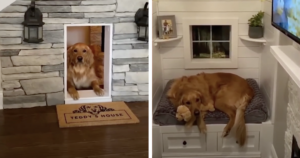 Teddy the Golden Retriever is one spoiled pup, but he certainly deserves it. He’s a smart, lovable canine who recently became TikTok famous for his silly skits. But one of the things he’s most well-known for is his luxurious doghouse. His human, Johnathan Lower, built an indoor home for the canine by renovating a closet. The doghouse has everything you can imagine, including an elevated dog bed, a digital fireplace, and a TV.

Does Teddy really need that much luxury? Probably not. But the results are undeniably adorable!

Teddy Shows Off His House

Many of Teddy’s TikTok videos take place in his cozy home. Lower shared a video of how he made the adorable doghouse, and he didn’t cut any corners. He spent about $5,000 to turn an old closet into a dream home for his furry friend.

From the outside, the wall is decorated to look like the exterior of a doghouse, with an opening just big enough for Teddy to squeeze in. However, there’s still a human-sized door on the side since it was once a closet. So, Lower can easily enter from the side, but he often opts for the small entrance anyway.

The little details inside the doghouse are the best part. Above the TV is a portrait of Teddy, while a sculpture of him sits on the mantel. In his bedroom area, he has a plush dog, a plant, and a photo of him with Lower. It’s almost as if he decorated it himself!

Lower started his TikTok with videos of him working on projects, one of which was Teddy’s doghouse. But over time, his social media quickly got taken over by Teddy, and now the two share funny skits and videos. Of course, Teddy’s perfect home is what started the fame.

Lower now has over a million TikTok followers, thanks to his furry friend. Some of their popular videos include movie nights, dinners, and other activities in the doghouse, along with social media pranks and challenges.

Some of the content is more heartwarming than goofy though. Every Tuesday, Lower spends the day doing fun activities with Teddy. He posts adorable videos about them called “Teddy Tuesday.” During these trips, Teddy has gone out for ice cream, for boat rides, to the dog park, and on hiking trails. It just goes to show how heartwarming their friendship truly is.

Lower said that he has gone through some difficult times recently, including the death of some family members. Having Teddy around helped him feel comforted and loved during those dark times. Lower hopes his videos can bring joy to other people’s lives too.

Dogs don’t need a luxurious dog house, but what they do need is love. And Teddy clearly gets plenty of love from his favorite human. What a lucky pup!