Golden Retriever Puppy Discovers Next Level Of The Tail-Chasing Game 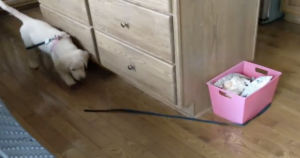 Every dog knows that chasing their own tail is an endless game. No matter how close they get, their tail continues to run away. Very few dogs have completed this game, but what happens once it’s over? Are all of life’s answers solved for a dog if they catch their own tail?

Luckily, a Golden Retriever puppy named Jeeya discovered something even better. She found a way to put an end to the sadness and boredom a dog might feel after beating their favorite game. The answer was simple: move on to the next level!

Jeeya surprised her family and friends when she found out that there is a second level to the tail-chasing game. As it turns out, the leash-chasing game is even more challenging.

The 13-week-old pup became fascinated in her training leash. Somehow, it had gotten wrapped all the way around the island in the kitchen. The end of the leash just lay there, staring her down. The only solution she could think of was to chase it!

In the video, Jeeya spends over a minute chasing her leash in circles. She has so much determination for such a young pup, so she doesn’t let herself get distracted. Although she stops to pick up a piece of newspaper for a second, then she gets right back to chasing her leash.

“My 13-week-old Golden Retriever named Jeeya is always fascinated with anything that moves,” said Jeeya’s mom. “Jeeya and I came back from our walk and she ran inside. When I got in, I saw her running around the kitchen island. It took me a moment to realize she was trying to catch her training leash.”

Toward the end of the video, Jeeya finally grabs hold of her leash. She walks around the island with the lead held tightly in her mouth. For a second, she lets go, but she quickly grabs it again. What a smart puppy!

Not only has Jeeya discovered the second level of the tail-chasing game, but she has now completed it! This video proves to dogs all over the world that anything is possible if you set your mind to it. Now, she has to discover what challenge comes next.

The post Golden Retriever Puppy Discovers Next Level Of The Tail-Chasing Game appeared first on iHeartDogs.com.