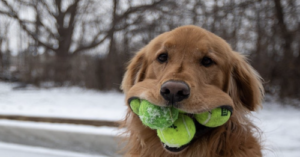 Finley the Golden Retriever from Canandaigua, New York loves tennis balls. Of course, all dogs love playing fetch with a good tennis ball, but Finley is the biggest ball hog anyone has ever seen. That’s because Finley likes to hold 6 tennis balls in his mouth at a time! It’s a special trick that he taught himself, and it’s actually more than the current world record, which is only 5 tennis balls at once.

Finley started this unique skill all on his own. His parents, Cheri and Rob Molloy, always knew that he loved hogging tennis balls. However, when he started approaching them with 4 tennis balls in his mouth at once, they were shocked. They’d never seen anything like it!

“I look over and he’s trotting over to me with four tennis balls in his mouth,” said Erin Molloy, Cheri and Rob’s daughter.

Four tennis balls soon became five. Then, five became six! Finley was determined to keep as many balls to himself as possible.

Finley has an interesting way of collecting all the balls though. He prefers having his family members throw him one ball at a time. He’ll catch one ball in his mouth, and then set it down to catch another. Once he has 6 balls near him, he casually picks them all up in his mouth.

Sometimes he picks them all up with ease, but other times he struggles to get the last few to stay. But no matter what, Finley is always determined. Once he has his mind set on holding all 6 balls, he doesn’t give up.

A few dog lovers were concerned when they saw Finley’s bizarre skill. However, the Molloys continuously remind everyone that they’re not forcing Finley to do this. He discovered this talent all on his own, and he’s as happy as can be! They even posted videos showing how Finley accomplishes it.

Even before Finley was able to hold 6 tennis balls at once, he was a notorious ball hog. Not only would he hoard his own toys, but he would even steal balls from the neighbors! Whenever the family brings him to the park, they always need to remember to bring a tennis ball along.

This adorable Golden Retriever has gained so much popularity that his family even made him his own Instagram page! He currently has over 29,000 followers! His parents are amazed that so many people want to see Finley play with tennis balls, but they’re also grateful that Finley found something that makes him so happy.

Hopefully, Finley will get the world record he deserves soon! Until then, he’ll just keep playing with his tennis balls as much as he wants. A good game of fetch will never get old for this sweet pup.