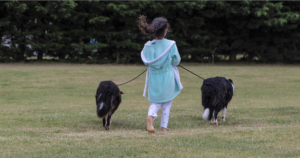 Many kids start learning the importance of hard work at an early age. While most want to spend their earnings on a new toy or save it for something bigger, Milla Janks from Johannesburg, South Africa, had a better idea. She and her half-sister started their own dog walking business because they love spending time with animals.

They earned a lot of money doing so, but they weren’t greedy about it. Milla chose to donate every penny of her earnings to the local SPCA to help dogs in need. Everyone is so amazed by her kind heart, and her school even wrote a heartwarming post about her on Facebook.

Learning Kindness at a Young Age

Milla is a fourth-grader at Redhill School. In May last year, Milla decided she wanted to start walking dogs in her suburb. Ever since then, she has been saving up the money she earned. While she certainly deserves to keep it, she knew she could do something even better. On August 31st, 2021, Milla donated all her earnings to the Joburg SPCA in Booysens.

“You know those people who quietly get on with the business of leaving people, places, and animals better than they found them? No fuss and no need to glory – just a quiet determination to make a difference? Milla Janks in Grade 4 is one of those people!” Redhill School wrote on Facebook.

This young girl’s efforts are inspiring, and she’s already showing more kindness and compassion than most adults. We could learn a thing or two from her!

Every Donation Makes a Difference

Of course, Milla’s animal rescue efforts didn’t stop there. Her dog walking business is still going strong, and she will likely donate more of her money in the future. After all, every donation can make a huge difference for animals in need.

Not only do Milla and her sister still work as dog walkers, but they’re also happy to dog-sit their neighbors’ dogs too.

“The girls continue to be popular weekend and holiday-time dog-sitters in their area – and are still saving up for charity! We think they are both PHENOMENAL human beings and want to be just like them when we grow up!” wrote Redhill School.

It’s one thing to love animals, but it’s another to act on that love by making a difference for pets in need. Milla’s passion for rescue dogs started at an early age, but it’s never too late to start helping animals.

The post Fourth Grader Donates All Earnings From Her Dog Walking Business To Save Dogs appeared first on iHeartDogs.com.