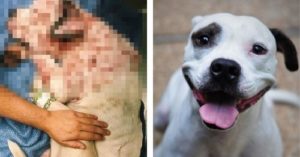 The Street Dog Foundation has rescued so many dogs in need of urgent care throughout the years. Though they have been a part of several desperate rescue situations, Liam’s story is forever imprinted on their hearts.

The rescuers at the Street Dog Foundation were made aware of an abandoned dog living behind a warehouse in Memphis. Once they arrived at the scene, they couldn’t believe their eyes.

Hiding between two dumpsters was a pitiful pup who’s spirit had been broken. He was covered in wounds from head to toe, and had the look of absolute fear in his eyes. After further assessing his wounds, it was clear that he had been used as a bait dog.

After everything he had been through, he was of course terrified to be surrounded by unfamiliar humans. Luckily, the rescuers of the Street Dog Foundation were prepared to do whatever it took to gain his trust and bring him to safety.

After hours of reassuring conversation and the offering of treats, they were finally able to scoop the injured dog into a blanket. They carried him to their car as they promised that his life of pain was now behind him.

The rescue team immediately took him to a nearby animal hospital where he received the medical care he so desperately needed. He was covered in wounds that needed to be treated and severely dehydrated from a life of neglect.

“The vet told us that in the 28 years she’s been practicing, she’s never seen a dog with as many bite wounds and live.” – The Street Dog Foundation

His stay in the animal hospital was documented day by day, and it was incredible to watch him come out of his shell more and more each day. What began as a terrified dog that could barely stand to look anyone in the eye, ended up a joyful pup who happily carried his new stuffed toy around the yard. He also seemed to enjoy having a special name of his own. His rescuers now called him Liam, and he truly glowed each time they spoke his name.

Even more amazing than his miraculous recovery was his reaction to other dogs at the clinic. Unfortunately, many bait dogs carry around a chronic fear of other dogs which can make it difficult to re-home them. While at the animal hospital, Liam not only tolerated the presence of other dogs, but actually made friends!

After a long hospital stay with a staff that was dedicated to get him well, Liam was finally ready to experience life as a loved indoor dog! He then set off to his foster home where he continued to heal and come of out his shell.

After some much-needed TLC and being medically cleared, Liam was finally ready to head off to his forever home. Luckily for Liam, his future family had been following his progress and knew they wanted to be the ones to give him the future he had always deserved.

Liam now spends his days in a loving home with his new furry best friend Dalia, who was also rescued by the Street Dog Foundation. This match was meant to be!

We cannot wait to watch Liam and Dalia thrive in their forever home together! Thank you to the Street Dog Foundation for making this incredibly transformation happen.