Firefighters Celebrate The Life Of Their Station Dog With Beautiful Ceremony 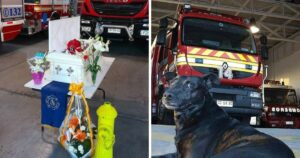 Firefighters in Iquique, Chile are grieving the loss of their beloved station dog, Negro. After serving at the fire station for over a decade, the first responders held a special ceremony to celebrate his beautiful life.

Negro spent the last decade offering emotional support to the hardworking firefighters of Iquique city. His role involved standing guard at the fire station when the responders were away and offering a heartwarming welcome with each return. Negro was a source of positivity for so long at the fire station, which is why his death has made such an impact on his community.

Negro’s undying love for his firefighter family helped the responders push through on tough days. No matter how challenging a dangerous mission may have been, they always knew Negro was waiting at the station to greet them with slobbery kisses. Even as Negro began to age and his health declined, he continued to offer support to his firefighter family.

“This afternoon, one from our ranks left the earth — our four-legged firefighter.” – Iquique Fire Department

Negro’s health began to deteriorate rapidly in the last six months of his life, but he ultimately died peacefully at the station at 14 years of age. Though his years of service may have come to an end, the Iquique Fire Department wanted to make sure his work was never forgotten. Not only have they honored Negro with an official firefighter rank, but they held a beautiful ceremony in his memory.

“We said goodbye in a very emotional ceremony as we are saying goodbye to one of our people who was an important part of this organization.” – Iquique Fire Department

The fire department held an honor guard funeral at the station, allowing Negro to be carried out of life as the dedicated firefighter that he was. They lined up as Negro was carried by in a beautiful coffin, allowing each of them to say a final goodbye to their best furry friend.

A fire helmet was placed on Negro’s coffin as the service ensued, offering him the recognition he deserved for his years of service. The love for their fire dog was evident in the ceremony, and just how much his presence will be missed going forward.

“In memory of our Negro. Faithful pet, friend and protector.” – Remembrance plaque for Negro

We send our love to those grieving Negro, and hope they can find peace going forward without their faithful friend.

The post Firefighters Celebrate The Life Of Their Station Dog With Beautiful Ceremony appeared first on iHeartDogs.com.