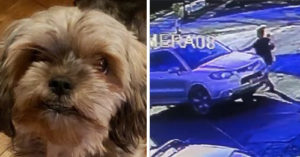 A family in Cleveland, Ohio is thankful to have their dog back in time for the holidays. Two-year-old Lucy was stolen from her family’s car earlier this month. The family took to social media and the local news as they pleaded for help. Of course, little Lucy is an important member of their family and they couldn’t imagine the holidays without her. Her family was left in disbelief that something so sinister could happen to them.

Lucy’s mom, Alaina, had just unloaded her children from the car to make a quick stop inside a local deli. The tiny Shorkie (Shih-Tzu and Yorkie) was patiently waiting in the car for her family while Alaina dropped off food to her husband. Almost as quickly as the door to the deli shut behind Lucy’s family, the dognappers were getting their hands on poor Lucy. She was stolen within a matter of seconds!

“I was watched and targeted as I was getting my kids out of the car! They stole my dog in a split second while I was preoccupied! I was able to get the plate but the car was stolen too,” Alaina wrote on her Facebook.

Alaina posted pictures of Lucy along with the surveillance footage of the dognappers. She was able to get the license plate number to later give to the police. Alaina described Lucy as having a bad haircut and an underbite.

“I was just trying to get the kids in the store and I was going to come back out to get my purse and something else I had brought for my husband,” Alaina told fox8.com. “I came out and he threw her in the car and when I grabbed the mirror, he just looked right at me and kept on going,” she said.

A Mother’s Love And Courage And A Happy Ending

Alaina could be seen in the footage running towards the car. She had her baby on her hip as she banged on the window trying to get them to stop.

“Because I love her, she is my best girl,” said Selena. “Give my Lucy back,” the 4-year-old pleaded. “I really love her. I really miss her a lot,” she told cleveland19.com.

But, don’t fret! This story has a happy ending! Lucy’s mom said from the very beginning that she didn’t care about the car, her purse, the cell phone or money that had been stolen. She just wanted her furbaby back. And, as if it was some sort of holiday miracle, Lucy was safely returned home to her family four days later!

“Everyone has a hand in bringing Lucy home and its nice to have a happy ending! Hope everyone has a Merry Christmas from our family to yours! Please be vigilant to what and who is around you and stay safe! Thank you all from the bottom of my heart. Lucy is our “best girl” and we’re grateful she’s home!” Alaina said.

She’s back snuggling with her sister and getting plenty of love. The details of Lucy’s return haven’t been released. However, her family has shared plenty of happy pictures with Lucy and that’s all that matters!