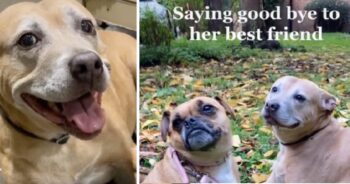 It was incredibly hard for Emmie to hear that her beloved best friend, Molly, who she has had since she was a puppy, had developed cancer. But because she has treasured every moment of her time with Molly, it was easy for her to decide to plan a memorable last day, filled with all of her four-legged best-friend’s favorite things.

Emmie shared her emotional video of their last adventures, and it’s already amassed over 350,000 likes.

Two months ago, Emmie received the devastating news that her sweet, senior Staffordshire Bull Terrier mix had developed many cancerous tumors all over her body. After what started out as a few lumps turned into painful masses, it was her veterinarian’s recommendation for 12-year-old Molly to be put down.

“A few lumps started appearing on her, but at first they weren’t causing her any pain and it was just put down to her getting old. Then about two months ago, a large mass appeared overnight on her leg and she began limping. We also found a large one on her spine,” explained Emmie.

Molly was prescribed painkillers by her vet, but the lump on her leg quickly doubled in size and it was obvious that she was no longer feeling like her usual self. So the difficult decision felt like the right one.

Naturally, Emmie wanted to plan one final, fantastic day full of beautiful memories before having to say goodbye. So she decided to treat sweet Molly to a day full of all of her favorite doggy things.

The first stop was a trip to McDonald’s where Molly tasted her first, and last, meaty cheeseburger from the golden arches. Not only that, but she also got to try a tiny puppy cup of ice cream.

Then, they were off to the pet store where Molly excitedly picked out a tasty treat of her very own, and got scratches from strangers. As she flopped down on the floor with her selection, her tail was wagging and she was practically smiling.

When they got home, Molly had some special outside playtime to say goodbye to her best friend and both of her doggy sisters. Then, they headed off for a short walk to their favorite spot. There, Molly rolled and frolicked in a field and then enjoyed some time laying under a tree.

The heartbreakingly beautiful video has been viewed 3.2 million times on TikTok. You may want to be close to a box of tissues while you view it, as this truly is a tear-jerker.

The post Family Gives Senior Staffy A Special Send-Off Before She Crosses The Rainbow Bridge appeared first on iHeartDogs.com.