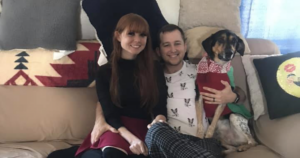 Dogs can sometimes sense things that humans can’t, but can they predict the future too? It doesn’t seem likely until you hear Milo’s story. The Bluetick Hound-Shepherd mix began acting unusual a month before a horrible incident occurred. He kept pacing in circles around his mom, Jenna Monet. Milo didn’t want to look at anyone but Jenna.

Then, Jenna ended up dying in a Tesla crash shortly after, causing Milo to flee the scene in a panic. Derrick Monet is desperate to find Milo for his late wife’s sake. Odds seem slim, but he’s hopeful that Milo is still out there somewhere.

Derrick was behind the driver’s seat when the Tesla crashed in 2020. Jenna died instantly while Derrick was left with injuries that he’ll likely have to deal with for the rest of his life. He suffered from an exploded vertebrae, fractured neck, broken femur, and collapsed lung. He has since been living with his mom, Brenda Monet, but he can’t remember much about the fatal accident.

During the chaos, Milo escaped from the back of the car and took off. Brenda is doing everything she can to bring the pup home. She knows it won’t make Derrick’s loss any easier, but at least he’ll have his furry friend to comfort him. Derrick and Brenda also want to ensure that the dog is safe.

The family has announced that there’s a $3,000 reward for Milo’s return. He went missing near Indiana while the family was driving home to Maryland after an Arizona vacation. Brenda says they’ll happily take Milo back with no questions asked.

“I’ll even take you to the shelter and get you another puppy,” Brenda said. “I just want to bring Milo home for my son. That was his little family and he lost it all.”

During the accident, the Tesla crashed into a parked firetruck on the interstate. The National Highway Safety Traffic Administration confirmed that the Tesla was on autopilot at the time, which was also the reason for 11 similar accidents. NHSTA is currently investigating these Tesla incidents.

When Jenna and Derrick first met Milo at a shelter, they fell in love with him. He was kept in a kennel far away from the other dogs because he was born in a litter that had parvovirus. Milo was the only puppy who survived.

Milo constantly thanked Jenna for adopting him by always sticking by her side. Derrick was working for the Air Force until his recent injuries, so Milo comforted Jenna whenever her husband was away. He’s a loving dog, but is often cautious around new people.

“He became Jenna’s emotional support dog,” Brenda said. “He didn’t leave her side for nothing, he literally was Jenna’s protector.”

Brenda and her husband flew to Indiana several times recently to search for Milo. Brenda also made a Facebook page to share updates and ask for help. She continues to hold out hope that Milo is alive and well.