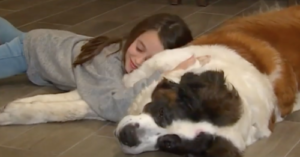 The first thing you will notice about Stroodle is that she is huge. She lives up to the size expectations of her St. Bernard breed, tipping the scales around 140 pounds. All who meet her see that her physical stature matches perfectly with the size of her heart. Gentle, loving, and sweet, Stroodle is a big ol’ teddy bear. This tender soul has suffered some terrible truths recently that remind us to never take forever for granted.

Stroodle lived in loving companionship with an older gentleman for all of her life. Neighbors reported that the man was quiet and kept to himself but everyone around knew that he loved his dog. When he passed away unexpectedly late this summer, neighbors assumed that someone would come right away to retrieve Stroodle and take over her care. They were wrong.

When days passed and nobody came from Stroodle the neighbors came together to collectively care for her. They fed her and let her out and made she had water to drink. Eventually someone did show up, but they didn’t take Stroodle.

Movers Came to Pack the House and Leave Stroodle Behind

One day a moving van showed up. Workers busied themselves packing up the entire contents of the house. They carried furniture and boxed up belongings. The filled the truck while emptying the house. Imagine how confusing this must have been for Stroodle. Her human was gone. All of her human’s possessions were being carted out of the house. Surely someone would soon be taking her, too.

After the house was empty the workers drove away. They left Stroodle standing in the street. Alone. Understanding that Stroodle had been abandoned, neighbors safely delivered her to the Placer SPCA.

While living at the SPCA, someone found that Stroodle had a large lump. That lump turned out to be cancerous. Stroodle showed no signs of discomfort but the tumor is malignant and will ultimately lead to Stroodle’s demise. This wonderful bundle of love and comfort went from being a beloved companion to a homeless and terminally ill orphan. And it broke everyone’s heart.

The Placer SPCA Makes a Plea on Television

The Placer SPCA arranged for media coverage of Stroodle’s situation. The director spoke of how sweet tempered Stroodle was and how everyone at the shelter has fallen in love with her. They still recognized that they were making a pretty large request in asking someone to take on this big girl who only has months to live.

Stroodle Comes Home for the Holidays

Of the many people that saw Stroodle’s story, the Cotton family were the ones who couldn’t walk away. After a frank discussion with the young children about Stroodle’s health and life expectancy, the family agreed to go meet her.

On Thanksgiving Day, the Cotton family went to meet Stroodle and knew they couldn’t say no. Everyone fell in love and knew they had to take her home to live out the rest of her life in their loving care. The very next day, that is just what they did.

This holiday season we are so grateful to the Cotton family for opening their hearts and home to Stroodle. She will bring such joy and love to the entire family each and every of her remaining days.