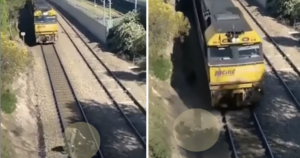 It’s easy to get caught up in fame on social media. Many people become obsessed with gaining followers and viewers on sites like Instagram, Facebook, and TikTok. But the lengths that some people will go to get recognized can be a bit extreme.

A TikTok user was repeatedly praised for saving a dog tied to train tracks in a heart-wrenching video. However, experts later announced that the video was likely faked for fame. Many people were worried for the dog’s life, even though no dog was in danger to begin with. Pulling off a stunt like that was no easy process either.

In the video, a man is seen sprinting down railroad tracks with a train close behind him. Further down, a small dog is tied to the tracks. The dog looks like a Cavalier King Charles Spaniel.

The man quickly unties the dog, then runs off the tracks with the pup right beside him. They jump off the tracks only seconds before the train speeds by. During this commotion, the train is honking its horn, and people in the background are urging the man not to do it.

After this 16-second video was first posted, people started calling the man a legend. It was an impressive and risky stunt he pulled, and it was certainly very believable. However, several people in the comments mentioned that something about the video seemed off.

Then, the video was later taken down from the TikTok user’s account. It violated the site’s “community guidelines of dangerous acts.” Yet, the video continues to pop up on other accounts, causing more and more people to be skeptical.

Video experts examined the post closely and concluded that it was likely faked. Not only was the event not featured on any news stories, but the dog also doesn’t seem in distress. When the dog sees the man in the video, they walk toward him and wag their tail as if they know him.

“The way the dog reacts like he knows the guy, and that (the man) knows how to untie the leash, all as if it was planned,” Sarah Ross from Four Paws International said. “It looks suspicious.”

So, experts suspect that the user filmed himself rescuing the dog first, and then edited in the train after. A few small details point to this explanation. First of all, the shadows of the train are a bit off. When it passes the man and dog, the man still has a small shadow under him despite being in the shade. At one point, the shadows are also blurry to indicate that two scenes were edited together.

While the video seems impressive at first, the man is receiving a lot of praise for something he probably didn’t do. A dog abandoned on train tracks is a serious issue, so it shouldn’t be taken lightly or joked about. It’s amazing what people will do for some extra social media followers.