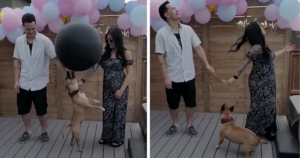 For some dogs, getting a human sibling is thrilling. Yet, others experience more jealousy. Either way, dogs want to make sure they’re still the center of attention, and they’ll do anything to get the spotlight.

A French Bulldog mix named Doobie wanted to make sure all eyes were on him even before the baby arrived. During his parents’ gender reveal party, he caused some complications, which postponed the anticipated news. But did the pup do it out of excitement or spite? Only Doobie has the answer.

Marie del Rosario and Jasa Grant, who are from Winnipeg, Manitoba, hosted a party to reveal the sex of their baby. They had a giant balloon that was filled with either pink or blue confetti. They wanted Doobie to do the honors, and they filmed a video of the precious moment.

However, the event didn’t go as planned. The couple lowers the balloon, so Doobie can reach it, and he jumps up at full speed to bite it. Instead of popping it, his nose bumps it so hard that it goes flying out of the couple’s hands. The camera turns to show the balloon catapulting away until it can’t be seen anymore.

Doobie probably just got too excited, and his humans weren’t holding on tight enough. Or maybe he was trying to send them a message. After all, a new baby might steal all the attention away from him. Regardless of his reasoning, the pup continues to run around and wag his tail happily.

The crowd seems disappointed at the anticlimactic reveal, but the couple knows they can’t end the party there. Luckily, they get a second chance.

The couple found the runaway balloon at a nearby park. It lost some air, but they could still pop it. So, they brought it back home to try the gender reveal over again. They even chose to give Doobie a second chance.

After that, the gender reveal went on with no more complications. Doobie jumped up and popped the balloon effortlessly, and his humans held on much tighter this time. Pink confetti burst from the balloon, announcing that the family was having a baby girl! The crowd cheered at the exciting news.

Doobie might not be ready to share the attention with a human sister, but he seemed just as excited about the announcement as everyone else. He’ll likely be the best canine brother ever!

Watch the Hilarious Footage Below: