Entropion in Dogs — Know the Signs and How to Treat It

Entropion is a disorder that causes the eyelids to roll inward toward the eye. It can affect the upper eyelid, lower eyelid or both eyelids. One or both eyes can be affected. The abnormal position of the eyelid causes the hair or eyelashes to rub against the eye itself. This is extremely uncomfortable for the dog — think of how it feels to have just one tiny eyelash rubbing against your eye. Now imagine an entire eyelid full of lashes rubbing against your eye — ouch! Even worse, with entropion in dogs, the lashes or hairs can damage the eye itself, causing scratches, scarring and even perforation. Over time, this damage can become severe, compromising your dog’s eyes and eyesight.

What Is Entropion in Dogs? 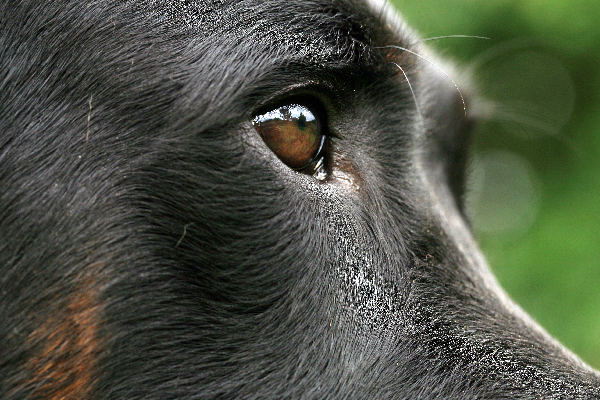 Entropion in dogs causes the eyelid to roll inward toward the eye. Photography ©fotokate | iStock / Getty Images Plus.

What Are the Signs of Entropion in Dogs?

According to Nancy Bromberg VMD, MS, Dipl. ACVO, a board-certified veterinary ophthalmologist at VCA SouthPaws in Fairfax, Virginia, some signs of entropion in dogs include:

You might also see squinting or excessive blinking, eye tics or redness.

Can Entropion in Dogs Be Treated?

Luckily, conformational entropion in dogs can be treated. Eye drops or ointment are generally prescribed to protect the eye from rubbing and to relieve pain and discomfort. “In young dogs (less than 3 to 4 months), temporary tacking of the eyelids may relieve discomfort and secondary spastic components,” Dr. Bromberg says.

Sometimes, puppies grow out of entropion as they finish growing and developing. Temporarily stitching the eyelids into a normal position alleviates the discomfort and prevents damage to the eye as you wait to see if the puppy will outgrow the condition.

Surgery for Entropion in Dogs

Outgrowing entropion is rare, though. Most often, entropion in dogs requires permanent, surgical correction to reconstruct the eyelids. Your regular vet may do the procedure or you can ask for a referral to a veterinary ophthalmologist, who does such procedures regularly.

“When young dogs have surgical correction, some ‘fine tuning’ of the correction is necessary once the head conformation matures,” Dr. Bromberg says. “Most veterinary ophthalmologists would rather under correct entropion than over correct, causing lid laxity [looseness], so occasionally additional surgery is needed. In most cases, surgical correction is permanent.”

What About Ectropion in Dogs?

A related condition called ectropion caused the eyelids to roll outward. Although it doesn’t cause hair or lashes to rub against the eye, ectropion leaves too much of the eye exposed, leaving it vulnerable to irritation and injury from debris getting into the eye.

The post Entropion in Dogs — Know the Signs and How to Treat It appeared first on Dogster.