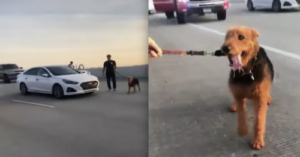 Toby Tinelli and his family were driving home on a Sunday evening in Houston without a worry in the world. The highway was fairly busy, but they continued to drive. That is, until they spotted a dog all by himself. The dog was running down the highway at full speed with his leash dragging behind him. There didn’t appear to be anyone with him, and he was running right into traffic. In a heartbeat, Tinelli knew he had to help.

First, Tinelli tried to call the dog over to him, but that didn’t work out. The dog started trotting toward him, but then took off in a different direction. The poor dog appeared terrified and didn’t know what to do.

It turns out, the dog had been in the car with his family when they got in an accident further up the road. In a panic, the dog ran away from them, not realizing that he would soon get lost. Tinelli knew that if he didn’t help him soon, the dog could end up getting seriously hurt.

A Community of Dog Lovers

As Tinelli was trying everything he could think of to coax the dog toward him, he was shocked to see that everyone else wanted to help as well. All the vehicles near the dog came to a complete stop once they saw the dog running freely on the road.

“Everybody was on the same page,” said Tinelli. “It seemed like it was really like a team-oriented thing, because everybody at the same time just slowed down and put flashers on, and immediately the first thing everyone cared about was taking care of that dog.”

It was a common agreement among all the drivers that this dog’s safety was a priority. Once the cars were all stopped safely, multiple people got out of their cars to help Tinelli rescue the dog.

The scared dog had no interest in coming toward the people, but with some patience and kindness, they were able to surround the dog so that someone could grab his leash. From there, they led him to safety, away from the middle of the road.

Tinelli’s family happened to have a bowl and some water in their car, so they brought that out to the dog to help him rehydrate and hopefully calm down a bit. The dog still seemed scared, and he had some cuts on his paws, but other than that, he seemed healthy.

Y’all wanna see why Houston is the best city on earth???

The dog’s family was relieved when they found out that he was safe. In the chaos of the accident and the traffic, they had been unable to chase after him. So, they were very grateful for all the fellow dog lovers that helped keep their furry friend safe. This story proves that despite our differences, dogs can truly bring people together and help them show kindness.

The post Drivers Work Together To Stop Traffic And Save Dog Running On Busy Highway appeared first on iHeartDogs.com.