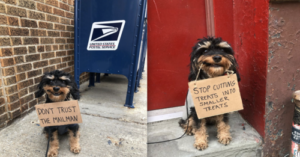 Baboy is a cute pup that has a passion for speaking her mind. She recently started her own Instagram to help share the world from a dog’s perspective, and the results are hilarious! Every few days, Baboy posts an adorable photo of herself on social media. In each picture, she holds a sign between her teeth, protesting something that all dogs and humans should know. She’s protesting on behalf of dogs everywhere!

Caroline, Baboy’s mom, said that the Instagram account was inspired by the famous ‘Dude With Sign’ page. If you haven’t seen it yet, Dude With Sign is a man that holds up hilarious protest signs that say what most of us are thinking. Now, Baboy is ‘Dog With Sign’, which many dog lovers would argue is even better.

Baboy’s first Instagram post showed her holding a sign that said “stop pretending to throw the ball.” Many dog parents found this hilarious, so the little dog continued to post more adorable photos. Some signs were relatable to dog parents, while nearly all of them were very relatable to dogs.

Caroline was amazed at how well Baboy could sit still, holding a sign in her mouth. Many dogs probably couldn’t even sit still for that long, let alone look at the camera. But Baboy is a good girl, and she was made for the spotlight.

“The internet’s reaction has been pretty positive. It’s definitely reinforcing when people reach out and say the account made them smile,” Caroline said.

A lot of the people that Caroline and Baboy hang out with are obsessed with dogs. So, Caroline gets a lot of her ideas just by talking to other dog lovers and spending plenty of time with dogs.

When she’s not on social media, Baboy is just like any other pup. She’s very playful with both humans and other dogs. She loves eating, but as many dogs do, she refuses to munch on vegetables.

Baboy is fairly new to Instagram, but she has gained popularity in no time. Her page already has over 25,000 followers! Every day, she seems to get even more popular.

Whether it’s warning dogs of the mailman, complaining about a lack of treats, or getting sassy with her mom, Baboy has plenty to say. If you ever wondered what your dog was thinking, Baboy might have some idea! Check out her Instagram page to see even more adorable protests.