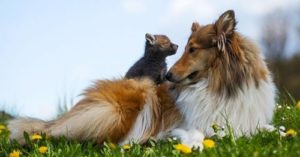 Ziva is always ready and willing to act as a surrogate mother to abandoned babies including foxes, deer, and wild boar.

When she was just under a year old herself, Ziva “adopted” a fox pup by the name of DiNozzo. The little fuzz ball became an orphan when his mother was hit by a car.

He was discovered beside her body, lost and hopeless. Without specialized care, his chances of survival were nil. Luckily, at just 3-weeks-old, he was taken in by Ziva and the Schmaings.

Right from the start, DiNozzo was a pawful! He climbed all over Ziva, pulled her hair, and gnawed on her ears.

But sweet Ziva was endlessly patient with the little pup. She treated DiNozzo as if he were her own.

She also had a bit of help from the family’s Bengal cat, Leopold who loves romping and wrestling with the energetic pup.

As he grew, DiNozzo taught himself to use the cat door so he can come and go with Ziva and Leopold.

“We’ve decided to let him live like any other fox outside the house,” Werner said.

Now that DiNozzo is all grown up, he doesn’t need Ziva quite as much, but the pair remain great friends.

Since DiNozzo lost his mother at such a young age, he does not have the necessary survival skills to return to the wild. However, life at Schelder Forest Wild Animal Rescue is the next best thing!

He has acres of vast land to run and play on, friends from all different species, and a loving pair of humans to keep him safe and well-fed.

DiNozzo is just one of the many animals Ziva has helped rescue and raise. Check out the video below to see her vast array of friends!

Schelder Forest Wild Animal Rescue is 100% privately owned and funded. Since they do not receive any government funding, the Schmaings rely on donations to continue to help animals like DiNozzo. Learn more on their Facebook page.

All of the gorgeous photos in this post and the included video were taken by Werner Schmaing.