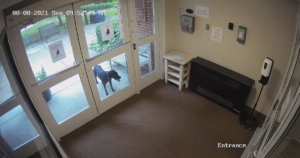 When Liza Thayer went out of town to attend a wedding, she left her dog back in Connecticut with her parents. Yet, the furry friend didn’t seem to get the message. The pup, whose name is Indy, thought her mom had left her behind by mistake. So, she quickly came up with a plan to sneak out and find her human again.

In the meantime, Indy also ensured that she wouldn’t be late for work. She often came to work at an elderly housing facility with Thayer, and as it turns out, she knew the commute by heart!

Since Indy is usually an obedient dog, Thayer’s dad let her wait outside on the deck while he grabbed her leash for a walk. But when he stepped back outside, she was gone! He grew desperate to find her.

15 minutes later, she arrived at Kirtland Commons, the Deep River Housing Authority community that Thayer works at. It’s about two miles away, but Indy got there faster than any human could.

“The residents called me and I went to Kirtland and could not believe it was Indy, and had on her own found her way to work,” said Joann Hourigan, the executive director of Deep River Housing Authority.

Thayer brings Indy into work regularly to give comfort to the elderly and disabled residents. They especially enjoyed the dog’s company during COVID restrictions. So, the residents immediately recognized the dog when she stood outside the door, waiting to be let in.

Employee of the Month

Sprinting two miles to get to work on a Sunday takes extreme dedication. Surveillance videos caught the canine running up to the building and looking in the front door. In fact, Hourigan was so impressed that she even named Indy the employee of the month.

Thayer is still amazed that Indy went on such a crazy adventure while she was away. She’s curious to know what route Indy took and how she found her way so quickly. It proves that dogs are even smarter than we realize.

“She probably assumed if momma isn’t at home she must be at work!! This smart girl navigated her way from my house in Chester to Kirtland Commons in Deep River. I am truly thanking all my lucky stars she made it back home to me safely. We are sososo lucky to have so many amazing people looking out for both of us!” Thayer wrote on Facebook.

Clearly, Indy loves her job and her human more than anything. But perhaps she should pay closer attention to her work schedule so she doesn’t show up unannounced again.

The post Dog Sprints Two Miles To Search For Vacationing Mom At Her Job appeared first on iHeartDogs.com.