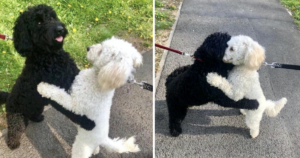 Many dog parents wonder how good their dog’s memory is. Do they remember what life was like before they were with us? Do they ever think about their past? These kinds of questions often worry us, causing us to wonder if dogs think like we do. Scientists have often said that dogs can’t remember much from their first few months, but a recent photo proves otherwise. A photo of two dogs hugging has gone viral, and not just because it’s adorable. The two pups were littermates, and they somehow remembered each other after a long time apart.

It started out as just a regular walk. Susan Killip walked her Cockapoo, Rosie, around the neighborhood. When Rosie started pulling toward another dog, Killip didn’t think much of it. But then she realized that the other dog looked just like Rosie, but with a darker coat. He looked just excited to see Rosie as Rosie was to see him.

The two little dogs ran toward each other, and once they were close enough, they exchanged an emotional hug. It was much different than most dog encounters. Usually, dogs want to sniff each other and play, but this interaction was much deeper than that. As it turns out, it was because Rosie was from the same litter as the other dog, whose name is Monty.

It had been about 10 months since Rosie and Monty had last been together, but they clearly recognized each other. After all, they were the two closest puppies in the litter. As young puppies, they were always together. It seemed that no amount of time could affect that bond.

“It was so lovely. They both just jumped up and hugged each other, it was amazing. They remembered each other after 10 months of not seeing each other,” said Killip.

Killip said that Jean and David, Monty’s parents, don’t live in the same neighborhood as her. That’s why the two pups have never crossed paths before. However, the dog parents agreed to keep in touch so the dogs could spend time together again. Even though they live with different families, they will always hold a special place in each other’s hearts.

Before long, photos of this adorable exchange were shared all over social media. Of course, the hug was so adorable and heartwarming to Rosie and Monty’s families, but the whole world seemed to think so too. It proved that dogs have a much better memory than we give them credit for.