Dog Plucked From Sludge After Falling Into 12-Ft. Deep Cesspool 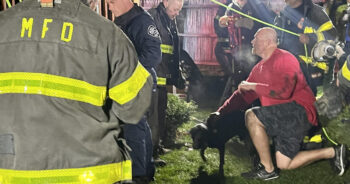 Like a septic tank, cesspools have to be pumped. It’s a nasty but necessary job. But when it came time for one New York family to have the duty done, they got more of a mess than they bargained for when their dog fell into the open utility hole cover and straight into the sludge.

Yuck, right? But more than just gross and leaving a dog covered in filth, the collecting gases in a cesspool are toxic and have the potential to do great harm to any living thing caught within the miasma. And because of the 12-foot depth, French bulldog/Lab mix Duke was trapped inside the cesspool after falling in. The poop pup was stranded in the filthy water with toxic air enveloping him.

While maintenance on the cesspool went on outside, Alison O’Loughlin and her family were inside their Melville, New York, home celebrating her daughter’s 14th birthday. But the fun quickly turned to worry when three-year-old Duke escaped the house. And the utility hole accessing the cesspool was open as he came blasting into the yard.

Duke’s mom, Alison, explained to WABC7, “He didn’t see the hole, and he went right into it.”

Twelve feet down, Duke was stuck in the filth and breathing toxic sewer gas. The O’Loughlins called for help, and rescue personnel from Huntington Manor Fire Department, Suffolk County Police Department, and the Melville Volunteer Fire Department responded, all agencies working together to rescue Duke.

“The dog had the wherewithal to jump through the rung of the ladder,” said Chuck Brady with the Huntington Manor FD. “When he did that, I grabbed the catcher’s snare, and we pulled up continuously at the same time, and we were able to get the dog out in one sharp movement.”

And Duke was out and back in his family’s arms. His family rushed to the vet, and despite the long fall and the gas exposure, Duke would be alright. He just needed a few days of recovery after his frightening ordeal.

“We feel so lucky that we live in a community that cares not just for the people but also for their pets.”


Rescue efforts took less than thirty minutes. But, as of now, there’s no word on how long it took Allison to scrub Duke clean!

RELATED: 8 Ways To Improve Bath Time For You And Your Dog

The post Dog Plucked From Sludge After Falling Into 12-Ft. Deep Cesspool appeared first on iHeartDogs.com.