Dog Is Best Friends With His Ferret Brother 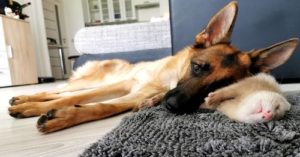 Nova is a big German Shepherd that loves to go on adventures and play. However, she never goes anywhere without her best friend by her side!

While most dogs are perfectly content just playing with humans, other dogs, or sometimes even cats, Nova’s friend is very different. Her best friend is her ferret brother named Pacco, and they do everything together!

Diana Grib has had Nova for about two and a half years, but she’s only had Pacco for a few months. However, it didn’t take long at all for the two to become inseparable. Right away, they couldn’t resist running around and playing with each other. Their differences didn’t bother them one bit.

“It took only one day for them to become best buds,” said Grib. “They couldn’t resist playing with each other.”

Despite being so small, Pacco actually appears to be the boss of this relationship. He knows he’s in charge, so he will often call the shots and sleep in the comfier bed when he chooses. Nova loves him very much, which is why she always puts up with him and always makes sure he’s happy.

Nova and Pacco are both very playful, and even though Nova might seem large and intimidating to some animals, Pacco has no problem keeping up with her high energy. They love wrestling and playing tug-of-war. Nova loves being the center of attention as much as possible.

The two also love to explore and go on walks together, so Grib has began taking photos to document their adventures. She even created an Instagram page to share their adorable photos on. They have over 10,000 followers so far!

Grib says that Pacco is not what she expected from a Ferret. He is very loving not only to her and Nova, but also to everyone he meets! Plus, he loves to cuddle with Nova, and he often acts more like a dog than a Ferret.

“They are very similar and different at the same time,” said Grib. “What they really have in common is their curiosity, bravery, and playfulness.”

When Grib brought Pacco home, she never imagined that such an amazing friendship would take place, but now she is so grateful that Nova and Pacco have each other.

Animals are so loving, and it’s heartwarming to see that dogs can befriend any creature, no matter how different they seem. Nova and Pacco have lots of exciting adventures ahead of them, and their adorable friendship will continue to be shared frequently on Instagram.

The post Dog Is Best Friends With His Ferret Brother appeared first on iHeartDogs.com.