Dog Flies Down The Stairs In Hilarious Video 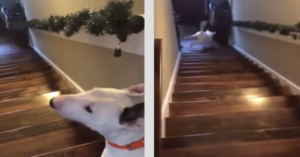 Tank the Bull Terrier recently got the hang of going up and down the stairs at his home. The stairs are completely wooden, so they can be slippery and scary for any dog. Not for Tank though! He is a brave dog that seems to think he’s indestructible. He quickly decided that he was able to do more than just go up and down the stairs, and he proves that in a new viral video.

In the video, Tank is sitting at the top of the stairs with his mom. She asks him if he wants to go down the stairs, and sure enough, he  starts walking down with no problems at all. However, he stops halfway down and rethinks his decision. Then, he climbs back up the stairs and disappears into a nearby bedroom.

Seconds later, Tank comes bolting out of the bedroom and flies down the stairs. He slides a bit when he reaches the bottom, but he lands on his feet, and he is perfectly fine afterwards. He and his mom both seem equally surprised by his risky trick.

“His new trick was running up and down the stairs,” Tank’s mom explained. “Our house is two stories and we just don’t go up there much. He was doing great. Then, he just decided to go airborne for no reason!”

Don’t Try This at Home!

Tank likely tried to fly down the stairs to impress his mom with a new talent, but it is definitely not a trick that they will be repeating. His video has gained so much popularity recently, but it is important for dog lovers to remember to never teach their dogs to do these types of stunts.

Stairs can be dangerous, especially for smaller dogs. So, Tank’s video is just a silly event that’s definitely not meant to encourage others to do the same.

Tank’s video was initially posted on TikTok by Brayden Bushaw. Since then, it has received over 3.6 million likes, 64,000 comments, and 750,000 shares. These numbers will likely continue to increase, making Tank a star simply for some silly attempt at a trick.

From now on, Tank and his mom will just stick to walking up and down the stairs. Now that Tank knows that he can’t actually fly, there is no need to try again. Plus, his mom wants to make sure he stays as safe as possible. So, while it is entertaining to see dogs do silly things, it is most important to make sure they learn from their mistakes so that we can keep them safe at all times.

The post Dog Flies Down The Stairs In Hilarious Video appeared first on iHeartDogs.com.