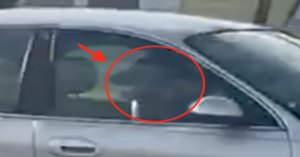 I don’t believe in ghosts. I tend to subscribe to the ‘Nancy Drew’ mentality that every bizarre occurrence has a logical explanation. For a while, the case of an unmanned car in Port St. Lucie, Florida this week seemed like something supernatural. Of course there did turn out to be a more logical explanation.

On November 21st, residents were totally spooked to see a car with no one in the driver’s seat making circles around the cul-de-sac… in reverse.

Anne Sabol, a neighborhood witness, told WPBF she noticed the car around 8:30 in the morning.

“I saw this car going backwards in a circle, and it was doing it for about an hour.”

Sabol kept her eye on the car’s bizarre movements for a while until the police arrived. Even the fire department arrived on the scene.

“First I thought I saw somebody backing up, but then they kept going and I’m like, ‘OK, what are they doing?’ Then I saw the dog get out of the car, a big black lab or something, and I’m like, ‘This is turning weird.’”

The driverless car turned out not to be driven by a ghost with a passion for circling in reverse, but a confused dog. Police say the human driver of the car stepped out with the car still running, and somehow the pup accidentally put the car in reverse. (Or maybe it was on purpose? Who knows!)

The whole time the car circled the cul-de-sac, the dog had no idea it was the one to set this all in motion. A still from the video shows a panting pup standing on the front seat, unaware. I guess dogs do love their car rides!

When the car slowed down enough, police were able to get the door open and help the doggie driver out.

First and foremost: no one – pup or person – was injured. The car did knock into a mailbox and a few garbage cans though, and the driver has offered to pay for that.

“I was like they should give that thing a license!”

Don’t ever underestimate your dog’s potential to cause mayhem when you leave them behind for a few minutes! And maybe also consider not leaving the car running with a pooch nearby.

Well, case of the ghostly car: closed. Now, to figure out what “spirit” tracked dirty paw prints all over my laundry room.