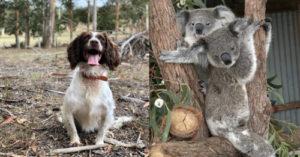 Like any dog, Taylor the English Springer Spaniel loves to smell things. She enjoys running around and sniffing the environment, but most importantly, she loves using her talents to rescue animals in need. After the devastating bushfires in Australia, there are lots of koalas in danger. So, it’s Taylor’s job to sniff them out and bring them to safety. She’s determined to make sure no koala gets left behind!

Taylor has been training for this heroic role since she was only 8 weeks old. Now, she’s 4 years old and plenty experienced. Not only is she great at what she does, but she enjoys it too!

“Every time she smelt koala poo or koala fur, she’d get her favorite reward which, as a puppy, was a tennis ball and treats,” said trainer Ryan Tate.

Taylor’s job is to help lead people to the koalas. She knows exactly what to look out for as she sniffs. So, if she smells koala scat or a live koala, she will alert her human co-workers, and they’ll come to the rescue.

Whenever Taylor finds a living koala, the team is able to bring that koala to safety. They take the injured koalas to the Port Macquarie Koala Hospital where they can treat any burns and other injuries that the koalas might have. So far, the hospital is caring for over 30 rescued koalas.

Tate has been an animal trainer his whole life, but he recently started working specifically with detection dogs. After working with someone who used detection dogs to rescue penguins, he realized how beneficial these smart pups really were. So, now he is always accompanied by Taylor to help as many animals as possible.

“What we essentially train the dog to do is enjoy that love for sniffing the environment but to discriminate a particular smell so every day out in the field for her is the best day of her life,” said Tate.

How Can We Save the Koalas?

Tate and his wife are both very passionate about wildlife. His wife recently gave birth to twins, so they have been busier than usual. However, the couple is still trying to devote as much time as possible to the koalas in need.

The Koala Hospital is doing everything they can to keep these koalas healthy. They’re currently trying to raise money for more than 100 water stations for the koala habitat.

The hospital is even planning to start a koala breeding program to help rebuild the koala population. Thanks to Taylor, plenty of koalas have been rescued, but they still need all the help they can get.

“Taylor’s very speedy and very dedicated and covers a lot more area much faster than we do so it’s been a great asset,” said Sue Ashton with the Koala Hospital.

iHeartDogs is currently working with responding partners to fund medical care for the animals affected by these wildfires. Not only were koalas harmed, but the continent is home to about 244 different species and many humans have been displaced as well. Currently, about 30% of the koala habitat is gone, so please donate to help these animals in need. Thank you to everyone that has helped with this unfortunate situation!

You can also adopt a koala through the Koala Hospital – your adoption will help them rescue and treat more koalas in need!