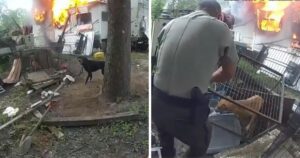 Two Candler County deputies put their lives on the line to save two innocent canine friends. Saving these pups meant running toward a potential explosion, but not even this could hold them back from their heroic mission.

Captain O’Brien and Deputy Coursey with the Candler County Sheriff’s Office responded to a call about an explosion on a nearby property. Upon arrival it seemed as if everyone on the property was out of harms way, but the clearing of smoke made the terrifying reality clear.

As the wind shifted and blew smoke away from an RV on the property, two terrified pups locked eyes with the deputies. These dogs were trapped right next to the burning RV, at risk of soon being engulfed by the flames.

“The wind shifted and the smoke went in another direction, as a result, I saw movement behind the RV.”  Captain Jamey O’Brien

Both dogs were held within feet of the burning RV, one tied to a chain and the other trapped in a metal crate. Officers on the other side of the property were cooking from the fire’s heat, meaning these pups were likely moments away from burning alive. The deputies knew what they had to do.

“I was like ‘if I’m hot this far away, these two dogs have to be cooking alive.’” – Deputy Elliot Coursey

With bolt cutters in hand, the officers ran toward the frightened pups, feeling the soldering heat with each step they took. Their arrival seemed to bring instant peace to the trapped canine friends, as they were immediately submissive to the officer’s helping hands.

One officer attempted to cut the chain the first dog was tethered to, but quickly realized the only option was to remove his collar and set him free. Once the first pup was rescued and running to safety, it was time to rescue the next pup.

The second dog was trapped inside of a boiling metal crate, which was made evident when hearing the pain the officer felt when attempting to move the crate away from the fire. The officer didn’t have any gloves to protect his hands from the heat, meaning his only option was to release the latch and allow the terrified dog to run free. Within moments the dogs were released from the grips of the fire, all thanks to the brave action of the animal-loving deputies.

The dogs were quickly captured in the moments following their miraculous rescue, and the deputies were able to assess their current living situation. After realizing that the dogs deserved so much more than what they were currently giving, the owners surrendered the dogs to the care of the city.

The dogs are now in the loving arms of a skilled foster family and are currently healing from their traumatic ordeal. Though our hearts break at the thought of the pain they endured during this terrifying event, we are so glad that they now have the chance at a beautiful future.

We send our thanks to the brave deputies that saved these beautiful pups!

The post Deputies Risk Their Lives To Save Chained Dogs From A Burning Fire appeared first on iHeartDogs.com.