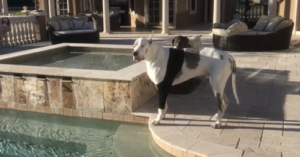 Max the Great Dane loves to go swimming in the pool, especially on a hot day. However, on one particular occasion, his mom didn’t seem to think swimming was such a great idea. She continuously tells Max no, which causes him to act like a disappointed child. He begins whining and throwing a temper tantrum, trying to get his mom to change her mind. Since they’re both stubborn, this disagreement goes on for a long time.

In the video posted of Max’s temper tantrum, he is seen wearing a jacket around his leg. These jackets are typically used to cover up a spot such as stitches or a sore that the dog is not supposed to bite or itch. Therefore, Max needs to keep this jacket on his leg, but it’s not supposed to get wet. Max doesn’t seem to care, but his mom is persistent.

First, Max starts whining as he stands near the edge of the pool. His mom tells him no and explains that his jacket is not supposed to get wet. Max is deaf, but he seems to clearly understand his mom simply from reading her lips and observing her gestures. It’s clear to him that she doesn’t want him in the water, but he still wants to swim anyway.

After whining for a bit, Max slowly approaches the water and reaches to dip his paw in, likely to just test the water. However, his mom keeps telling him no, so he doesn’t go any farther. His whines do not stop though.

As much as he wants to swim, he is a good boy and understands that his mom knows best. Of course, she wants him to be able to swim and have fun, but she knows that he needs to stay out of the water for his own safety.

Max only had to wear the jacket for a short period of time, so once he got it off, he was able to swim once again. He is such a smart dog that knows how to behave. His heart was set on swimming in this video, but he loves his mom so much that he decided to listen to her instead.

Max and his Great Dane siblings have become social media famous over the years. They post plenty of adorable videos on Rumble, and they have their own social media account too. This adorable video is just one of the many events that this family has decided to share with the world.