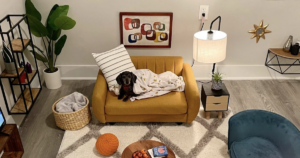 Most dogs are spoiled, but these three Dachshunds have the most glamorous life imaginable. Peaches, Challah, and Mitzi, run the house, and they even have their own living room. Their dad used a spare room in his home to create a relaxing area for his beloved dogs. The best part is that everything is to scale for the small Dachshunds. So, many people can’t get over how cute the room is!

The Dachshunds’ dad continuously posts updates on TikTok about new additions to the room. He even revealed how he created some of the mini furniture, which is mostly repurposed or hand-built.

A man created a TikTok page for the sole purpose of sharing videos of his dogs’ living room. The living area is in an extra room, but all the furniture is scaled perfectly for the Dachshunds. Each dog has their own couch-shaped dog bed, and all three couches are facing a 24-inch TV.

The walls have art that’s small and low enough for the dogs to admire. The dogs also have a coffee table, end table, “mini-bar,” and aquarium. So, many people in the comments joked that it’s much nicer than their own living rooms.

Some dogs might not be interested in a room away from their human, but Peaches, Challah, and Mitzi seem to adore their extra space. In several videos, they’re seen lounging on their couches, looking directly at the TV. Sometimes they also sit on the same couch together.

Their dad explained that the pups still use the regular living room too, but it’s hard to compete with a room made specifically for them.

Many followers questioned how expensive the room was, so the man addressed it in a video. He claimed that all the furniture is cheaper than it would be to furnish the room for a person. Plus, a lot of the items were repurposed or built by him.

He purchased the couches and TV, but he made most of the furniture from other items. The coffee table is a salad bowl with a plate on top of it, and the end table is a kid’s organizer that he painted and added legs to. Yet, it’s done in such a creative way that you’d think the furniture came that way.

No matter how many videos he posts of the dog living room, it’s always adorable and exciting. To see more updates on the room, you can follow the Dachshunds on TikTok or Instagram.

See a Tour of the Dog Living Room Here: