Crying Dog Runs After Cow Who Raised Him 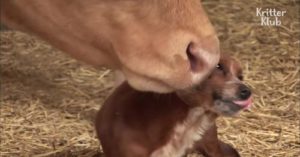 This is the kind of story that makes those “unlikely animal friendship” calendars go flying off the shelves. It’s about a tiny brown dog named Rookie and his best friend in the whole world: a cow. Yes, she’s a dairy cow. She’s also, he seems to believe, his mother.

The two are similar in [brown] color. He’s very tiny and she towers over him, but Rookie often sleeps on top of her back. They even share a water bowl. They’re udderly (yes, that was on purpose) inseparable.

The farmer these animals belonged to had two cows and planned to sell both. Rookie feels safe underneath his cow mom, and without her he felt lost and scared. His worst fear was realized one day when his cow mom was taken away on a truck.

A tearjerking video posted by Kritter Klub on YouTube tells the love and heartbreak these two best pals experienced. It surged to over 2 million views.

From the start, you can see the pure love and trust as the two exchange kisses.

Then the worst happens: the cow is dragged away from their shared enclosure. Rookie is completely bewildered.

You’ve never seen a look so devastatingly sad! Rookie starts crying. Then, he takes off and runs down the street after the cow.

The pup overheard her moos and picked up her scent and was able to track her. His people, who chased after him, had to bring him back. The scrappy little dog is not having it. He wriggles and cries, trying to get back to the cow.

Obviously, this separation just wasn’t meant to be. At least not yet. Rookie refused to eat and became very antisocial. He was too devastated without his protector and friend.

Rookie was then all the more ecstatic when one day the cow appeared at the door of the enclosure once more. She was back! He was so happy to see her again.

The farmer says he ultimately decided to keep the cow for Rookie’s sake. Currently, they are working on getting Rookie more comfortable with other dogs and people. By using the cow’s scent, he’s more comfortable approaching them.

You can watch the entire video (in two parts) here! And for the record, yes, I would buy a calendar with this on it.

The post Crying Dog Runs After Cow Who Raised Him appeared first on iHeartDogs.com.